Hi all,
My name is Phil. Just over the half century mark and have been building models since I was 6.

My main interests is WWII to modern day. WWII is more focused on the Desert Campaign (and Malta's big part in that), and the Normandy invasion. Also anything from Korea, Arab-Israeli wars, Vietnam, and Desert Storm.

I like small air forces and have plans for many of these from WWII on (got a Birddog for Malta even though I think they aren't flying any more).

Will build most anything in 1/72nd scale including aircraft, armor, boats and sci-fi. Also dabble in autos but mainly Movie/TV or Tom Daniels and even figures.

Also on a big What If kick for the last few years. Nice when no one can tell you that your camo is wrong for that time

Found out about this site through a Malta GB I am participating in on Britmodeler. Going to try and do one of the 40mm bofors defending Grand Harbor so if anyone has any good pics, most interested.

Besides building I also like to take pics. Airshows, Museums, and model contests especially. If you are looking for something, especially from the Western US, let me know and I will see what I can do.
iCocker

Welcome to our forum! Looking forward for your Bofors built, what model are you using as all 1/35 around are not exactly the English versions. By the way we had also US versions in sister island Gozo and St Paul this arrived prior the invasion of Sicily Op Husky and were manned by US GIs [the Italeri version is ideal to depict the american type]. Probably AFV Club should come with the British version soon ... contrary to many beleives the Bofors which a number were manned by the Royal Malta Artillery [Maltese reg] were sand coloured and some camo with swiggles of brown, not the famous Malta stone camo. The units near the Grand Harbour were placed on concrete platforms which are still around nowadays.

As for soldiers many were manned by the RMA, which sported the tommie hat with malta camo [green stripes or brown]. Uniforms were typical British depending the season, summer were sometimes so hot that they ended with shirt or nothing but in colder period winter type were also worn ... see images below.

The one that popps out on google that is in stonecamo and shields and is nowadays an exhibit in the National War Museum is a post war version, probably a movie prop.

The Upper Barrakka ones ... note the camo 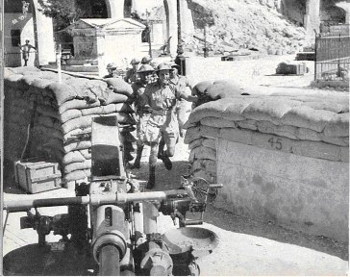 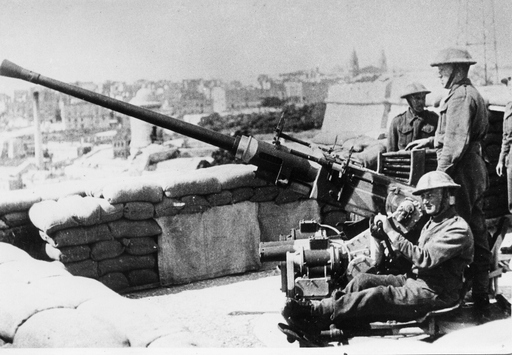 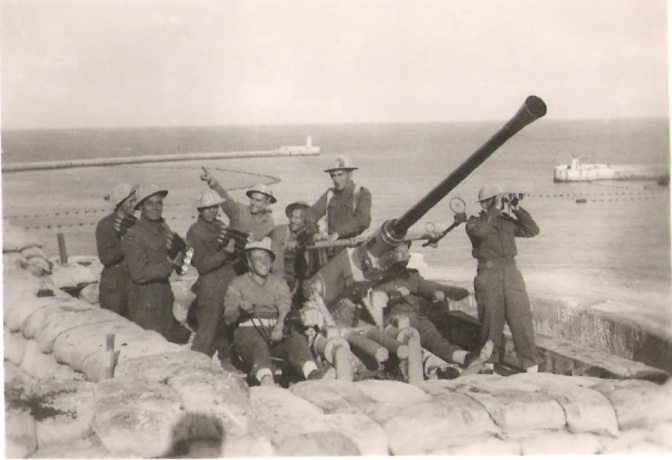 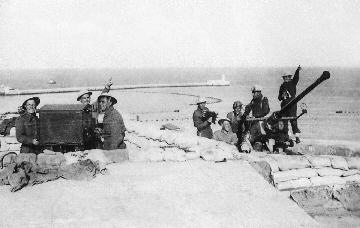 Note how it is fixed [bolted] to a concrete casemate. 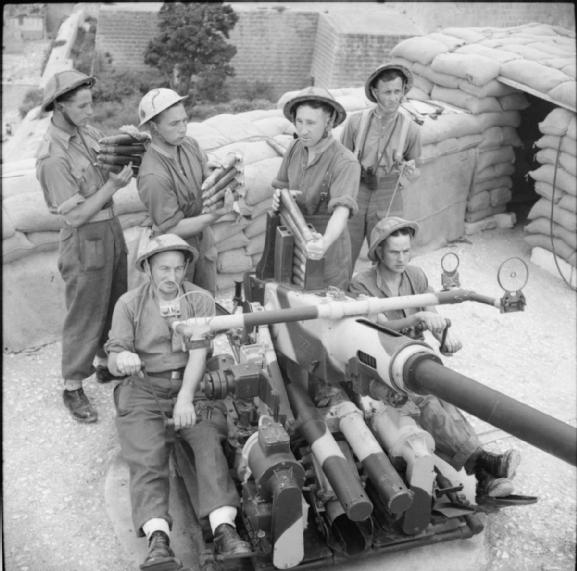 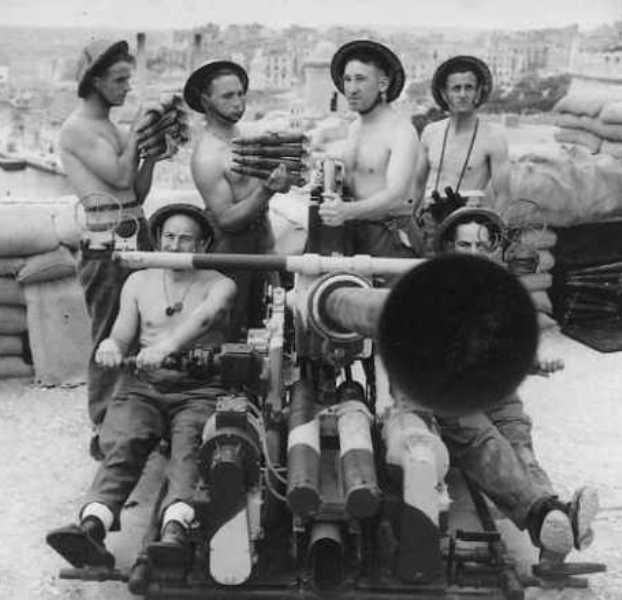 Manged to find what you are looking for ... this is one of the gun emplacements in the Grand Harbour ... not sure if it's a Bofors one but they had the same basics of style and design, sandbags were also added ... 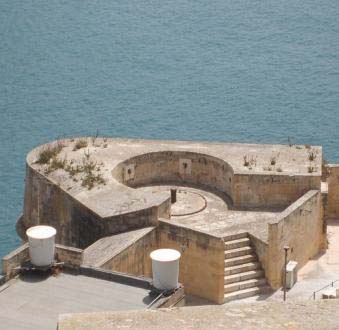 This is a local living history group and man a bofors, check the notes and also the data about uniforma and camo.

Prosit Ivan your the man...were getting famous.....

Wellcome aboard Phil ....we are just a small Island here, but full of History ..If you need any inf mainly aircraft just ask , we try to do our best ...

skyhigh wrote:Wellcome aboard Phil ....we are just a small Island here, but full of History ..If you need any inf mainly aircraft just ask , we try to do our best ...

Welcome aboard Phil - new here too (as I mentioned on Britmodeller) - but they seem like a great bunch of guys (and *very* talented!

Oh - and they have a track record of walking away with competition trophies wherever they've been...

Thanks all for the welcome and thanks for the pics. Have found most of those but didn't notice how the gun was mounted in the one with the crew around it. Also the pic showing the mount now is perfect.
Have the Bison kit, is the Canadian version so hoping is close enough. Will do it without the shield. Probably will go with just the tan version but might do the camo to help people recognize where it is. Also the crew (if I get that far) will have the camo helmets. Also got the Bison crew (for a review) but they are in more northern European dress so might try to modify some of my 25 pounder crew. Will be lucky to get the done built at my glacial speed but hopefully I will find the time.

Will some day also build a Sea Gladiator and Matilda tank in Malta markings.

Seen a pic of a Matilda towing bombs to a Wellington but can't find it again. Did find one of a Universal Carrier doing the same duty so hopefully I wasn't mistaken.
iCocker

Glad images were of use. Re Bronco model I know that it is a very good kit, no idea what is the difference between the British and Canadian version, probably minor things or it was something in the carriage which was no particular use for this project. Regarding the figures how are the Bronco figures compared to Miniarm, Dragon or Masterbox? I guess if you use them you can do a winter Malta setting by just swopping with eraly tommy hats and paint them in Malta camo : )


Once I heard a story about one gun emplacement in Barrakka Gardens [overlooking the centre of the Grand Harbour]had a type of guard not to be lowered to avoid anything friendly in the harbour area ... during the Blitz on HMS Illustrious these guns were used to creat the famous box curtain on top of teh ship and Senglea, but some Stuka pilots noticed that if they lower the plane they were not hit, so they tried to attack that way. The RMA gunners were so annoyed seeing the bombers coming over the water and pulling the famous finger at them, that one of the gun's crew took off the gun's guard, leveled it downwards and started firing at them. Seems they had some hits but were charged for this action. Not sure if it was a tale but things can happen during the war ... what is sure Luftwaffe failed to kill the carrier and went back home with less Stukas and bombers : )


The fotos known of the Matilda's are one with early rubble camo at Ghajn Tuffieha/Penbroke proving grounds. The other most common one is the GRIFFON foto [late rubble camo] probably near Ta Qali/Busketto area and then there is a blurred one with a Matilda pulling a bomber [forgot what]. The ones with the bombs are Bren Carrier ones, might a Matilda done the job as that was their normal duties, tractors on airfields [pulling aircraft or loads] but not aware of any foto, so if you come across one, kindly share it with us as these are scarce ... very scarce. In all if not mistaken we had 3/4 Matildas all named, but there were other tanks like the tiny Vickers [now available in plastic by Vulcan], A9, A13 and Valentines, apart early type brens and a good number of lorries and tillies.