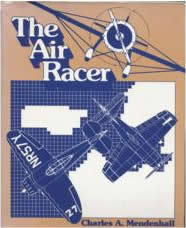 Wilbur: We have two airplanes now, what should we do with them? Orville: Let’s race! OK, that never happened but racing has been around pretty much since there were two airplanes to race, in fact in the very early days of airplanes you didn’t even need to have two airplanes, they would also race cars and motorcycles in front of the crowds.

The Schneider cup and the Golden Age of racing from 1929 through 1939 saw huge advancements in the planes and the power plants. For the most part the planes were built by small firms or individuals scraping their money together while the engines were built by new engine manufacturing companies and were the basis for the powerful engines of World War Two. The planes really were a flying laboratory and were the fastest planes in the world, easily going faster than the contemporary military planes. Quite a number of the racers had wings that weren’t as thick as the stabilizer on a modern civilian plane.

Racing stopped during World War Two and picked back up in 1946 and stopped after the 1949 race, a combination of a racer crashing into a house and the Korean war starting in 1950 causing the military to pull its participation during race week, as great as the races were, the people running the show knew they couldn’t succeed without military participation during the airshow.

In 1964 racing picked backup at Reno, Nevada. Two years ago they broke the 500mph lap for the first time which just goes to show this continues to be the world’s fastest motorsport.

Models of these planes have always held an interest but other than the Williams Brothers kits and the rare resin or vac kit, your only option to have a Golden Age racer was to completely scratchbuild one and to have a post war racer would quite often take some hefty scratchbuilding. One major problem, especially for the Golden Age racers was finding plans to scratchbuild from.

This book is an air race modelers dream. There is roughly one page of the history of air racing and the rest of the book is taken up with drawings of 234 aircraft ( some pages will have drawings of the main aircraft and sections of the plane that were changed for different races). This book covers the Schneider Cup racers of the 20s, the Pulitzer and Gordon Bennett racers, the Thompson, Bendix, Greve, and Goodyear racers of the 30s and 40s, and the Unlimiteds, Formula 1s, Sport Biplanes, and AT6/SNJs of the modern era up through the 70s.

Most of the drawings consist of detailed three views, some racers will have interior detail showing the framing and some show modifications made through the years. Construction materials are noted along with color schemes given. For racers I had photos of I’ve found the drawings to be fairly accurate although on some the cowl or wheel pants were slightly off. Reference photos would sure help, but for quite a number of the racers photos would be extremely hard to come by. 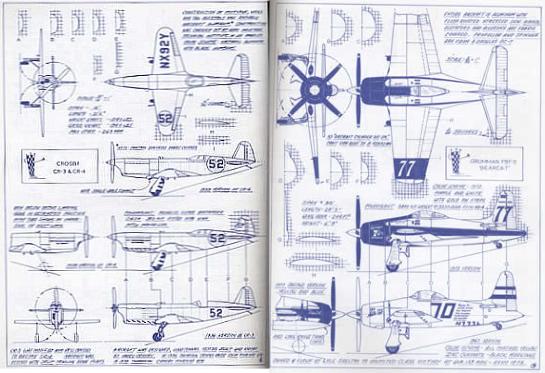 In conclusion, if you love building models of the air racers then this book is a must as finding drawings of a lot of these planes would be extremely hard otherwise. Other than the one page of history, nothing on the planes is written other than the occasional note of how they placed so for the casual historian this book wouldn’t be of much interest. I was unable to find the book currently listed, you should be able to find one through an online used bookstore or ebay.