Hi there gents, lately I did not post much of my work since I was only doing this model that I will be posting in this thread, apart from the rusting and paint chipping trial I posted.

So since this is my first build, I decided to go for a cheap model and see how it goes. I purchased an Academy Humvee 1/35 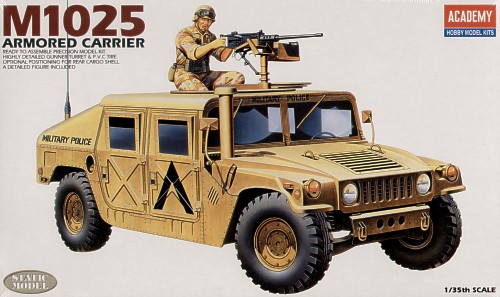 So here's the first cutting and gluing of this model

Though I was wondering if I should start painting some parts from right now since maybe later on they would not be reachable with the brush.


here it is starting to come together

the parts are overlaying each other so in some places it would be hard to paint. Now I assembled them anyway but will try to paint them later on.

Here I'm cuttign parts to see how they fit together

I started painting the interior, even though it won't be seen much when finished but wanted to have a little detail

Here I applied some paint chipping on the rear, where normally heavy boxes of fuel cans are loaded

Here I masked and sprayed on the primer

while masking teh model, I accidentally hit the handle of the back door and lost it, so I decided to try and make one from copper wire, it looks crude, but its my first attempt in making parts

Then I came to the turret, and since I'm doing an open turret, I had to cut the lid in half to fold it, so while at it, I decided to try and add a couple of small details to it, just for fun and to try.

Now came the paint job, this was my first time using acrylics as I went for 'Life Color' paints, it was an excruciating job since I had a white primer and the paint was very light too, so I couldn't see where the paint was hitting or not. Luckily it did not go that bad.

I then started to do some small weathering on the bottom side, mostly chipping and a little rusting, the dust and grime I will leave for last, when all the model will be ready. Some of my friends told me that the rust on the exhaust is heavy, I felt that it was right, but I would also like a comment from all of you on this.

looking at the 50 cal that will be mounted on this humvee and actually I did not like at all the ammo box that came with the kit, so I decided to try and build one myself, even though I never attampted something similar.

Now I think I really FKD up this model, when I came to give it a black wash. After I finished the wash I realised that I had given a semi gloss lacquere coating, but this was enamel and for the wash I used oils :S. When I was applying the oils this was getting smudged instead of following a capilary action in the corners, when I touched the brush with the thinned oils (oil paint + white spirit) it was dispersing on the paint, as if when touched on a blotting paper. Is this because the varnish was enamel, or I was using something wrong?

I decided to proceed and try to fix the wash in some places, then try to dry brush some base paint on the worst places, well its already a good result for my first model (from my point of view) next time I'll try not to repeat the same errors

I had to remake the rear antenna myself, since it broke in my hands as I was cleaning it.

Now I started adding some pigments (pastel chalks) I hope I can find the correct colours, so far I did not fix any of teh pigments, will do so when I see the appearance is right with a coat of enamel Matt Varnish.

Though my first model and the look of it is nothing near a professional model, I'm quite happy with the result, next time I will be more carefull on certain mistakes I made on this model

I am not an AFV person so my comments don;t really count but i think that you did a very good job on it. i would have gone for more variation in the paint whilst spraying it on, with fading etc and less emphasis on heavy weathering like rust. I am not expert but i think that you went a bit overboard with the rust unless you are portraying an old, war weary machine. Otherwise, i would go for paint chipping and dirt but not so much for rust. Also, can you post some pics of the whole vehicle? It would be nice to see it all at once and not just photos of details from the machine.
Maxi_Model

Also I added rust only on the turret bolts as i found some close up shots on the internet and they start rusting since they are placed on a flat surface (rain and mist tend to fall on the turret and hold water) and placed a little more rust around the turret collar since in between metals its hardly possible that paint reaches in there and even though there could be a possibility, with friction it could peel and bare metal tent to rust (in desert I know that at night its very humid) I mostly did this little rust from logic that my mind worked out and from photos I found, I might also be wrong though

I did the rusty exhaust, because again from my logic, the metal of teh exhaust tend to become very hot from the humvee powerful engine andlike BBQs hot metal tend to peel off any paint applied on it, maybe I went a little too far though, could have left some paint showing

This is my first model as I said, so with the trials I made and all of you helpfull comments, I will improve more and more

Thanks again for the input.
Maxi_Model

A couple of photos of my first finished model

Not a master piece, but I'm happy with the results.

I also know of some mistakes that I've done which will try not to repeat again in the future ( like the dark wash which I used black instead of brown, rust a little heavy on the exhaust, pigments for dust could have been blended better, some small detail could have been taken care of better)
Any constructive comments are welcome on what could I have done better or different

Your first model? You should be proud and happy! Well done!

Noel Petroni wrote:Your first model? You should be proud and happy! Well done!

Thanks guys, yeah its my first model. As i said in my introduction, about 20 years ago I uswed to do some kit building of aircraft, but nothing on a professional scale, I used to glue parts and paint them with brushes. This time I started with the aim to have models like you all build, PRO

and this is my first of the line.

Thanks again
in nannu pec