History background
HMS Malaya started own duties in her second war with the 1st Battle Squadron, Mediterranean Fleet. The “air” service for 1st Battle Squadron was covered by 701 Naval Air Squadron (formed on 15 July 1936 at Kalafrana, Malta by re-designating No. 444 (Fleet Reconnaissance) Flight FAA). Swordfish from this unit opened a long list of victories on this type of aircraft in the fight against Uboot's - in April 1940, in the Second Battle of Narvik floatplane catapulted from the H.M.S Warspite to spot for the fire of British vessels (fight with seven German destroyers) were sinking one of the destroyers itself with bombs, and later destroying a U-64 submarine.


At the beginning of World War II Malaya was the first used for hunting for German trade interferers and operated temporarily while in the Gulf of Aden. In January 1940 it moved into the Atlantic and secured several convoys plying between the United Kingdom and Freetown. In March 1940, Malaya came back to the Mediterranean fleet and took in the summer, after Italy entered the war, and participated in a supply operation for Malta.

As part of the Force C Malaya was here on 9 July 1940 in the Battle of Punta Stilo. During the battle, which ended in a draw, several ships were damaged on both sides, including Malaya, which suffered from Italian air attack splinter damage. There, the fire control of the heavy 10.2-cm Flak was temporarily incapacitated.

As part of the fighting in North Africa was the Malaya against Italian Cyrenaica facilities along the coast used and shot on 18 August 1940. Together with the battleships Warspite and HMS Ramillies and several cruisers and destroyers, Italian positions at Bardia and Fort Capuzzo. It then entered the Malaya part in the transfer of the force F from Gibraltar to Alexandria (Operation hats), on which the sixth Completed September 1940.

In late 1940, the Force moved H , the Malaya secured in January 1941, an additional supply convoy to Malta (Operation Excess) and adopted February 1941 attack on the part of Force H to Genoa (Operation Grog). Genoa harbor was bombarded on 9 February, with the force sinking four cargo ships and damaging 18. A salvo from HMS Malaya landed between 200 to 50 yards short of the Italian battleship Caio Duilio, undergoing repairs in dry dock north of Molo Ciano; no damage was reported. A targeting error by a gunnery officer on board HMS Malaya led to an amour piercing round hitting Genoa Cathedral, the shell failed to explode and remains on display there. There were 144 civilian dead and 272 wounded at Genoa as result of the shelling.

Unexploded bullet that fell on the cathedral in Genoa.


The activities of German raiders in the Atlantic saw her transferred to ocean escort duty and on 7 March 1941 her presence with convoy SL67 forced Scharnhorst and her sister to break off an intended attack. Catapulted Swordfish ran out of fuel whilst shadowing the German battleship on 8 March 1942. Aircraft and crew were interned in Spain. The Swordfish was put on the strength of the Spanish airforce as HR6-1 on 6 December 1943 with 54 Escuadrilla, Puerto de le Cruz, Tenerife, Canary Islands. While escorting SL68 she was damaged by a torpedo from U106 on 20 March, some 250nm WNW of the Cape Verde Islands. After reaching Trinidad, she was ordered to the USA for repairs at New York Navy Yard, these being completed by July.

HMS Malaya flows out from New York after completing repairs.


She was again ordered to Force H in October, participating in Malta convoys and the reinforcement of the island's fighter defenses. In March 1942 she escorted part of the Madagascar invasion force to Cape Town, but her transfer to the Eastern Fleet was rejected because of her low endurance, and she was transferred instead to the North Atlantic Command. In this month it came the Malaya back to the Mediterranean and became again assurance tasks for several convoys, including in June 1942 at the Double Convoy company WS-19/MW-11 (operations Vigorous and Harpoon) to Malta. Following the ship was back in the Atlantic and was docked in October 1942 for a stay in Rosyth dockyard. During the two months of the reconstruction plane devices were reproduced from board. Instead, it received the Malaya two additional 10.2-cm and 16-Flakzwillinge additional 4.0-cm Flak and two, then twenty 2.0-cm-Flak.

Between January and July 1943, the battleship participated in other escort operations in the Atlantic. The constant convoys, however, required a toll on the drive system, which suffered under increasing signs of wear and age. Since the speed limit was reduced to just under 15 knots and the plane was about to collapse, it was decided in the summer of 1943 to remove the ship from the active fleet service. In August, the Malaya at Faslane was first placed in the reserve status in December 1943 and completely decommissioned.

In June 1944, shortly after the invasion of Normandy, the old ship was reactivated once again to fight the French and German fortifications along the Dutch coast. The last war, the use of Malaya saw on 1 September 1944, when they opened fire on German positions on the island located in Saint-Malo Cézembre. The island garrison surrendered a day later. In October 1944, the Malaya was again added to the reserve status


Model.
Model built in order to learn how to made the tendons in biplanes. Because the Smer model is straight I was not worried of its shortcomings and errors - therefore minor corrections and supplements I made mainly to fill emptiness in the model. In themselves using the residues and remains of other models I made cabin equipment (instrument panel, radio, control panels, etc.), rear gunner gun and spare magazines, pilot's gun, crew seats with belts. Tendons I made by using a core of rubber strands, antenna and a cords to the rudder i made using elastic threads drawn from wife's stockings.

Model was painted using Humbrol enamel and Agama acrylic varnish. Wash made using MIG's Neutral and Dark Wash. To brake monotony and homogeneity of colors in several places I slightly wiped surface by the polishing material. At the end to the highlight convexity and give a little "worn" appearance to the model I put filter made from strongly diluted MIG's Neural Wash. Original Smer decals were not applicable due to poor color and wrong size - that's I used Techmod decal sheet for RAF airplanes and "scrap" from other models. 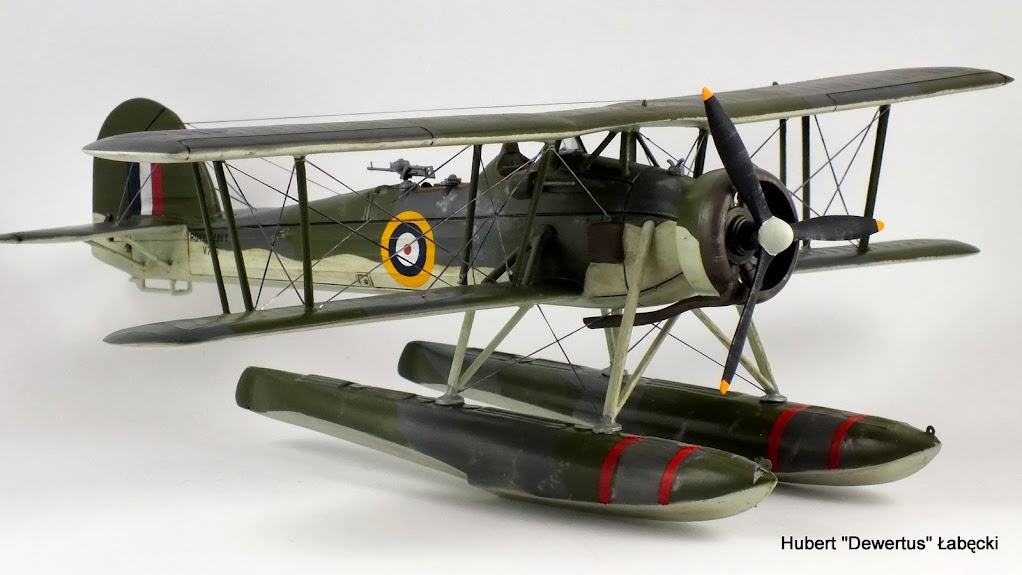 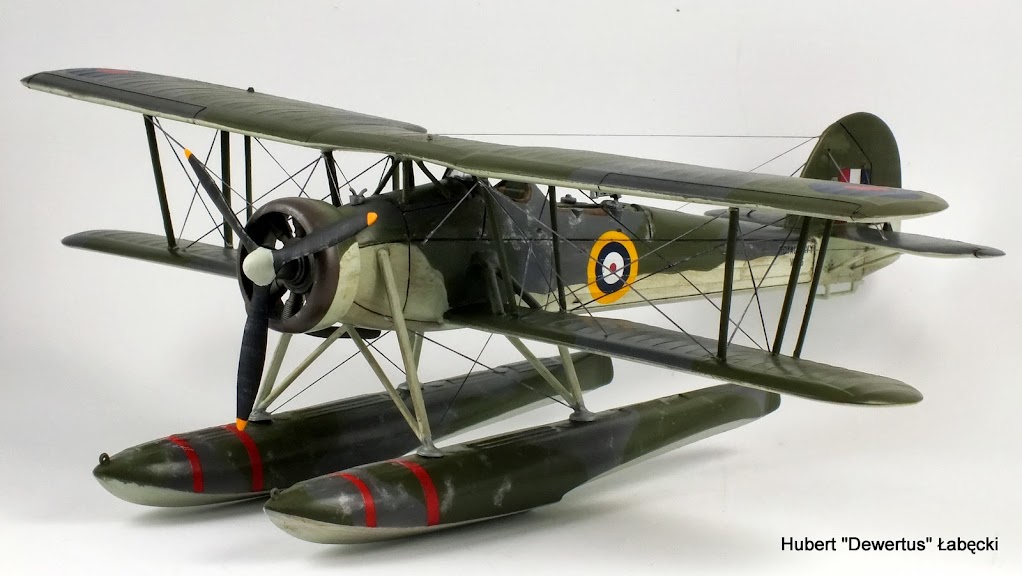 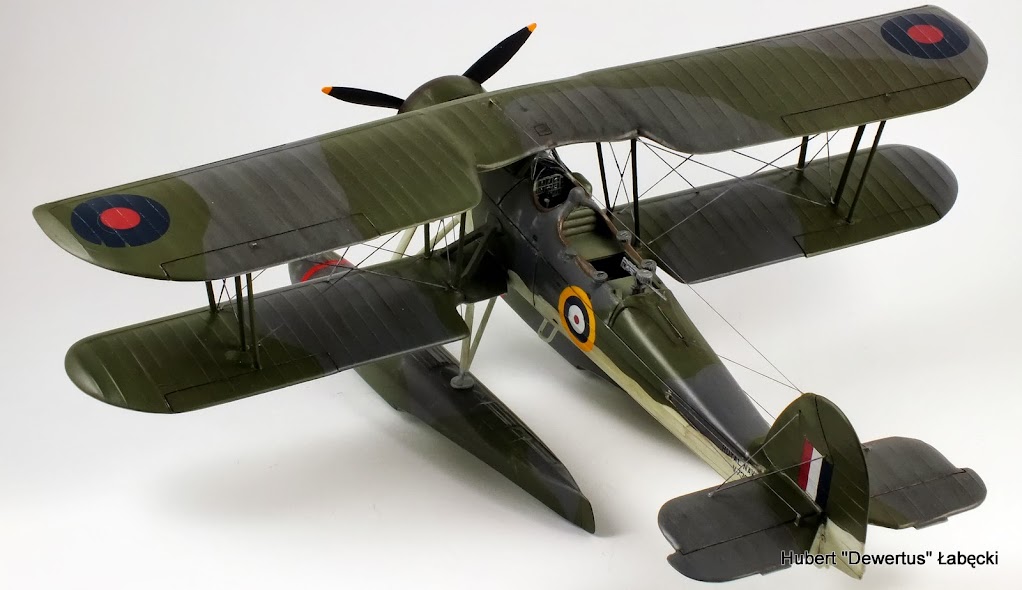 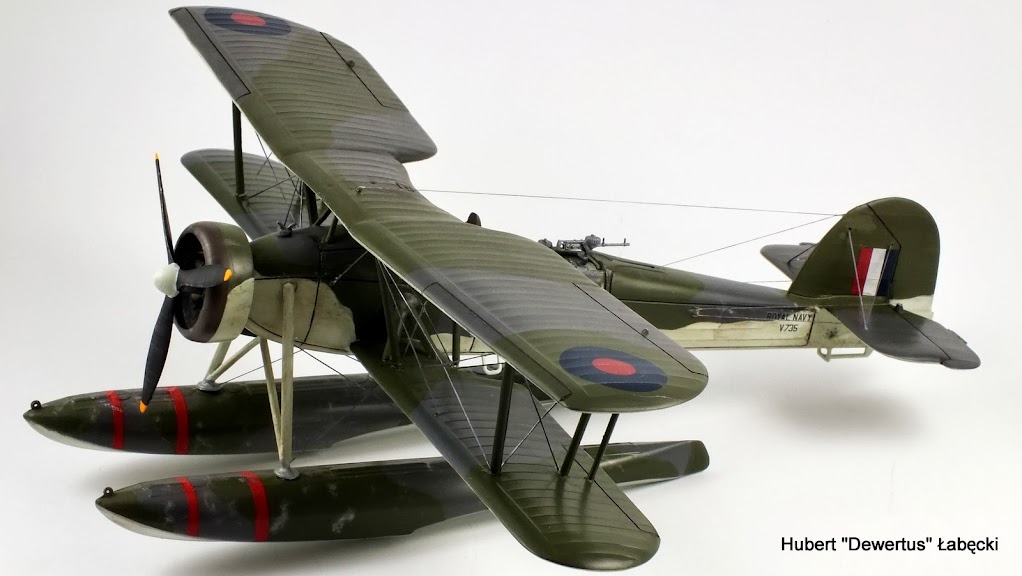 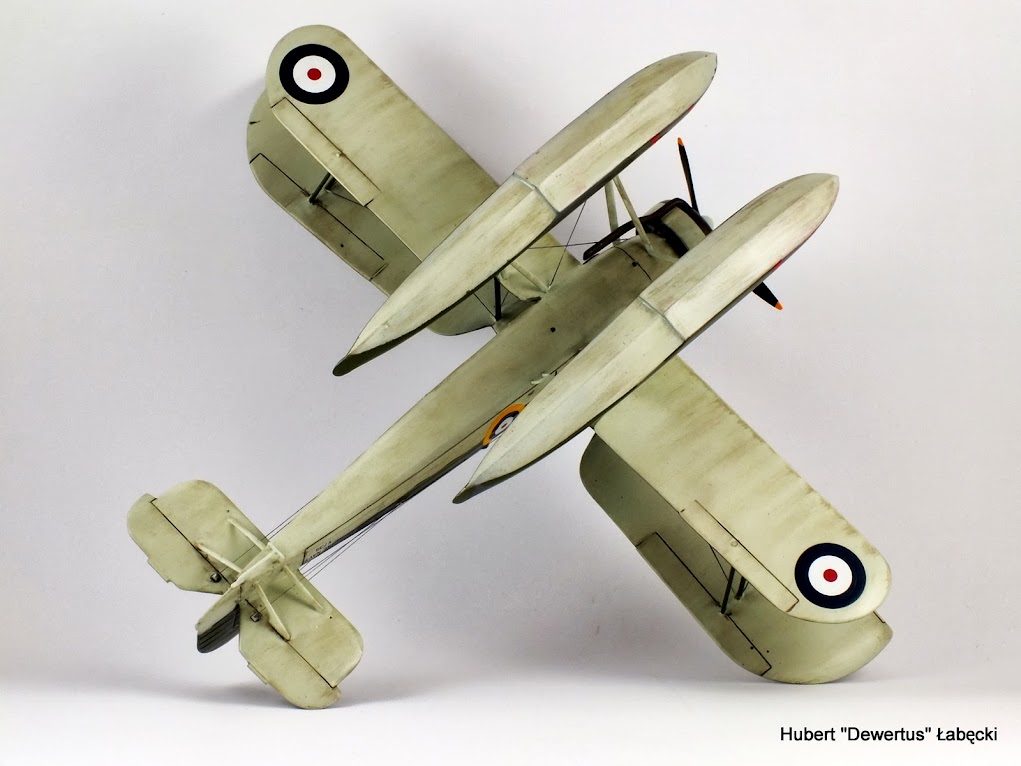 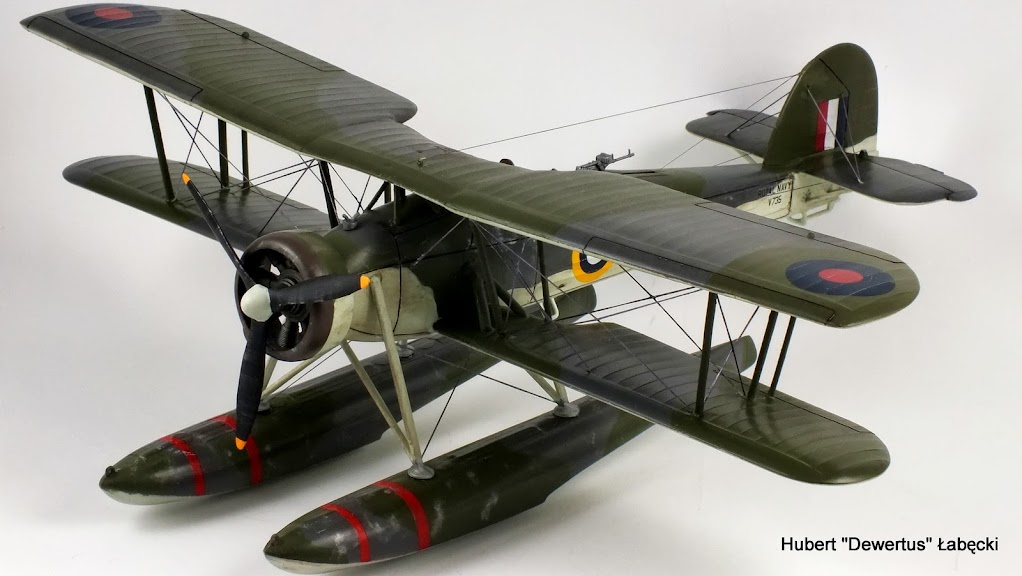 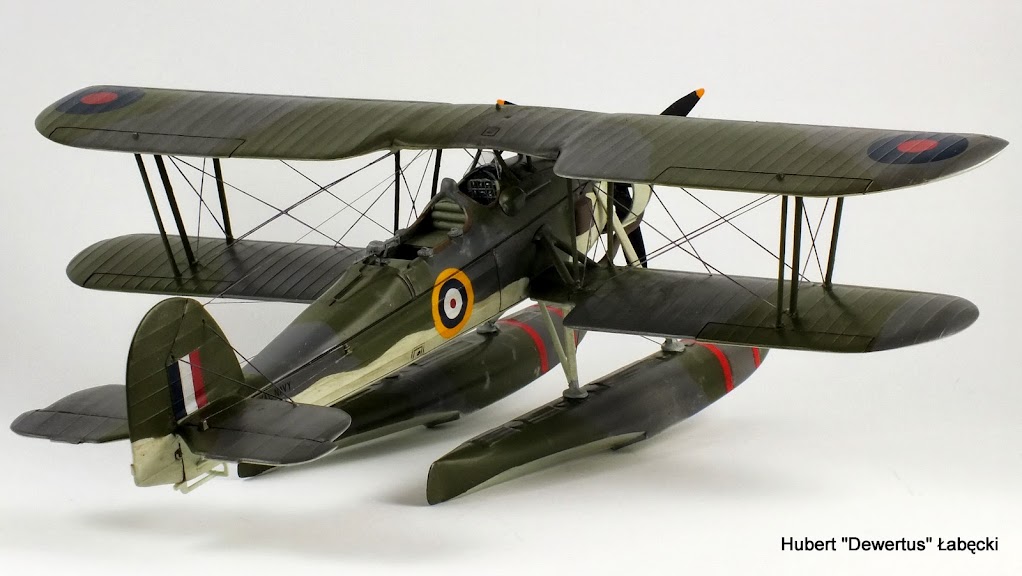 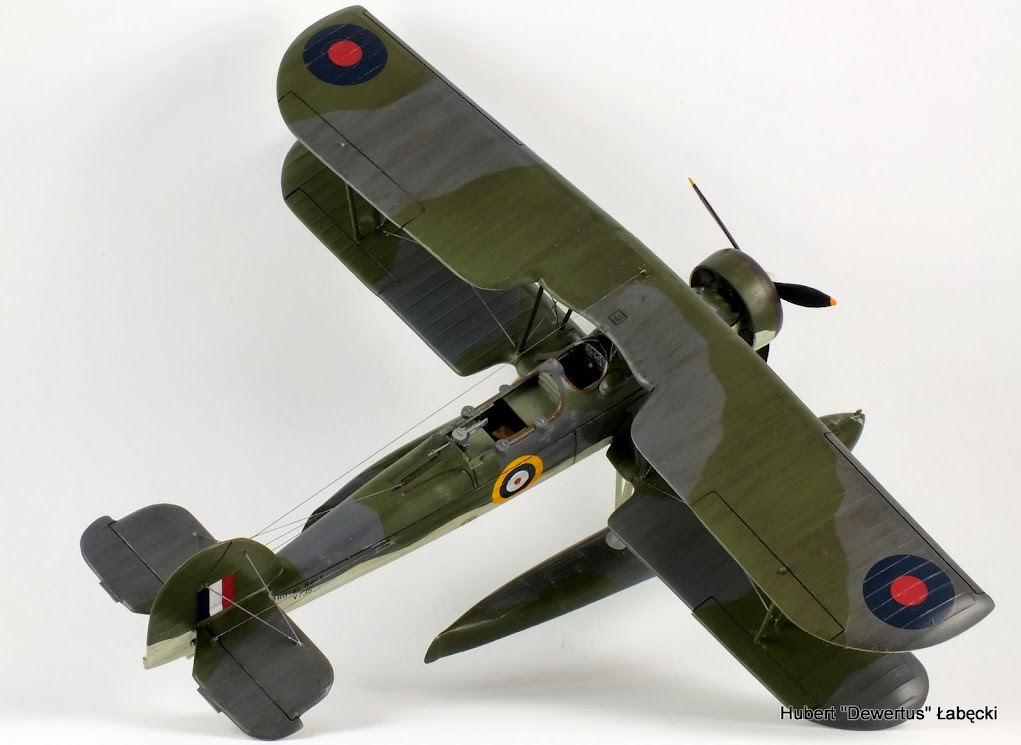 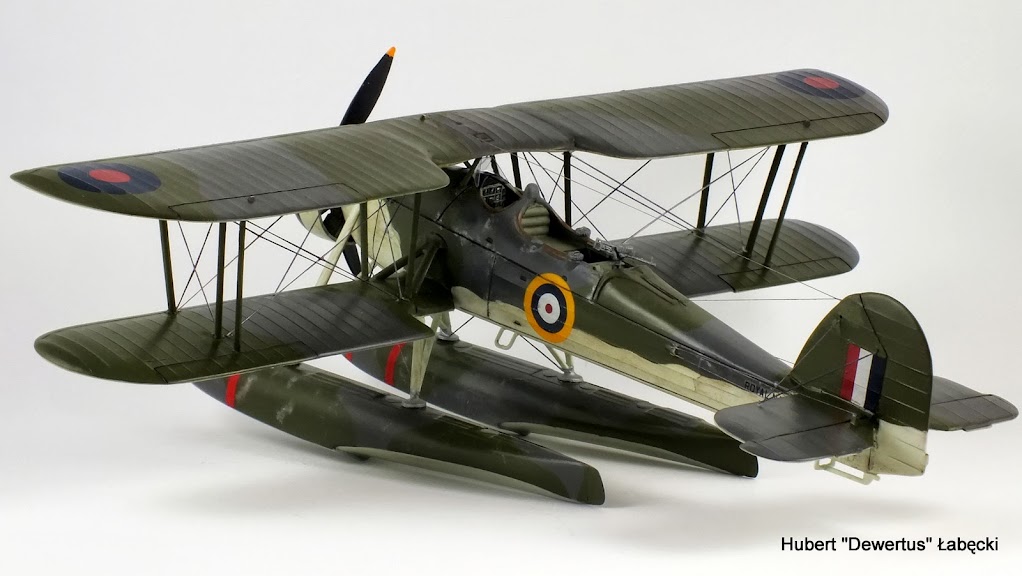 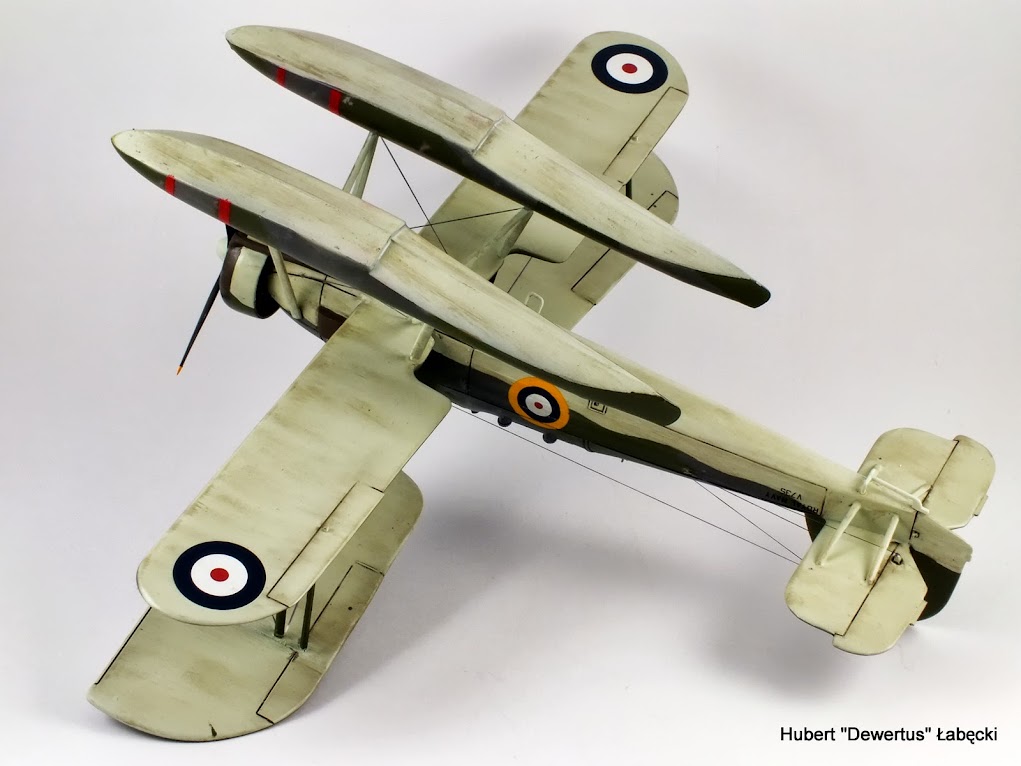 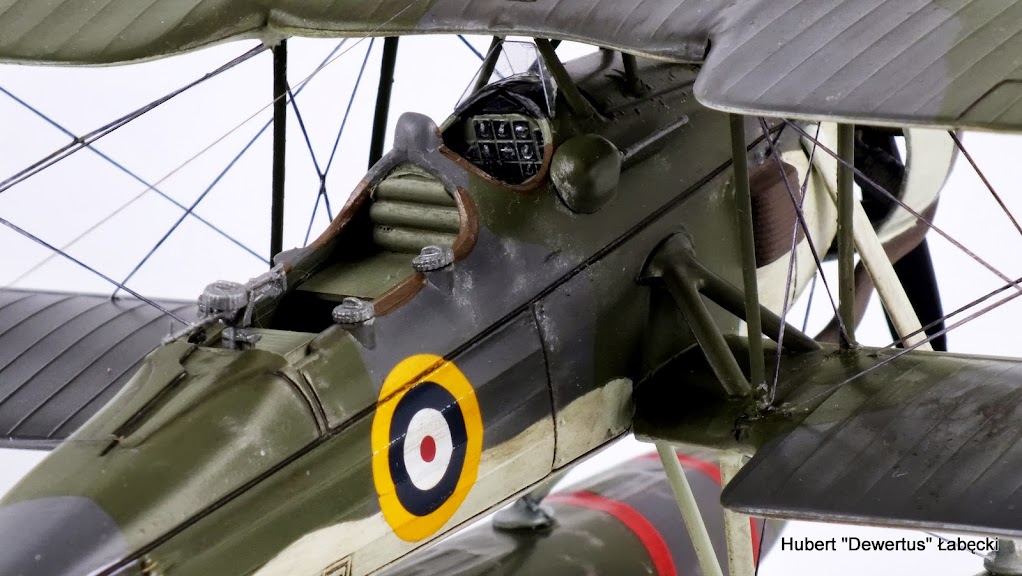 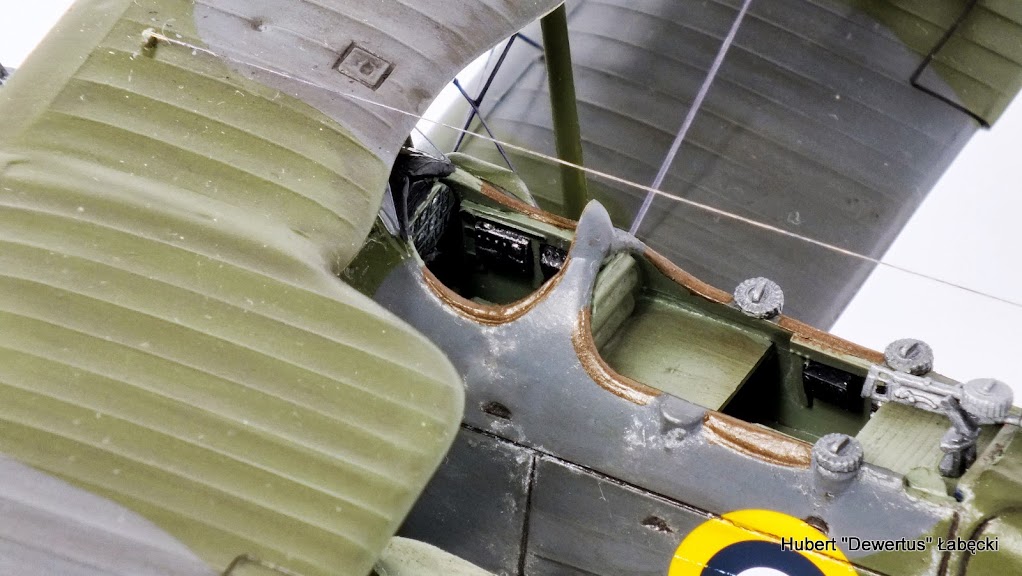 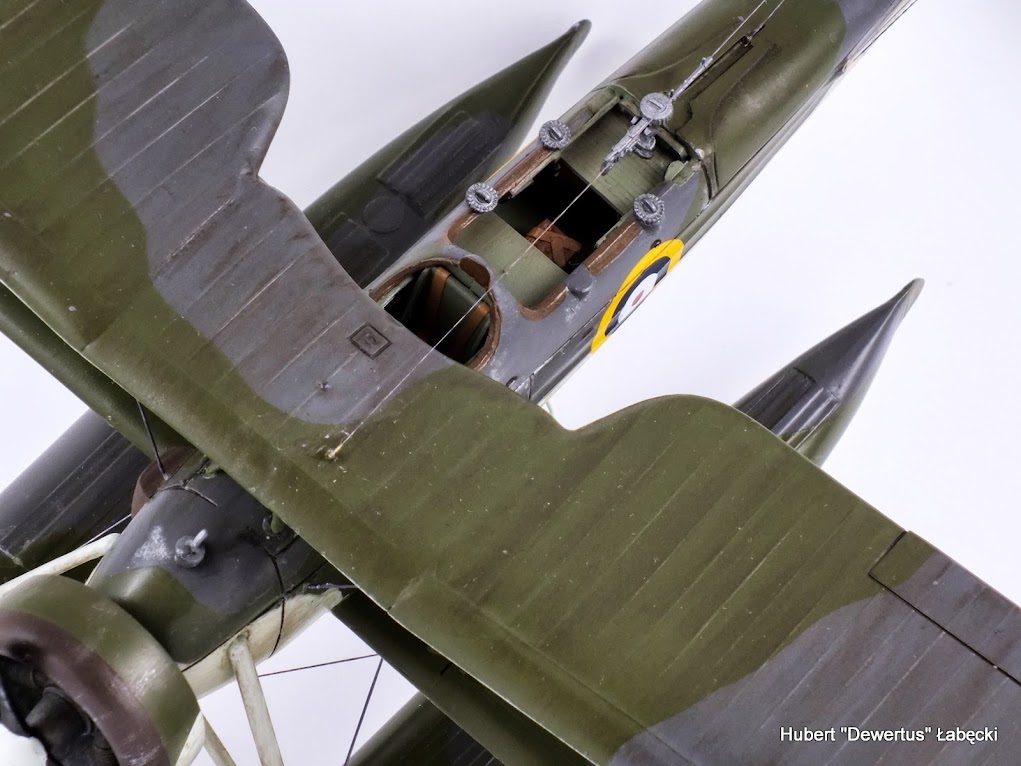 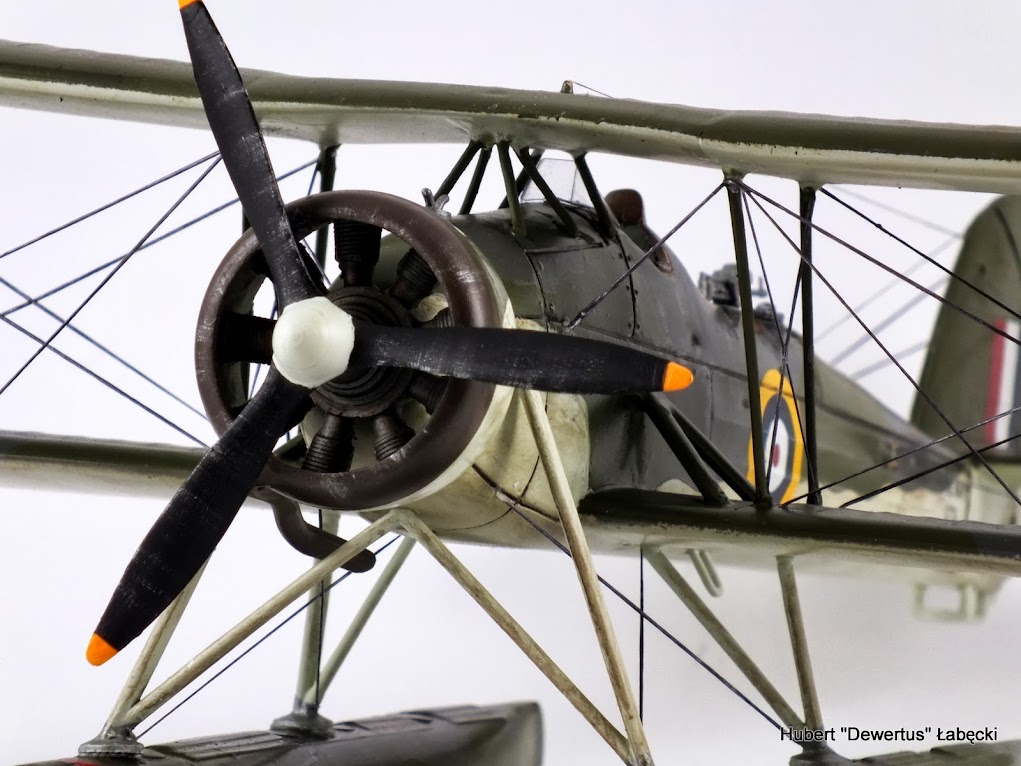 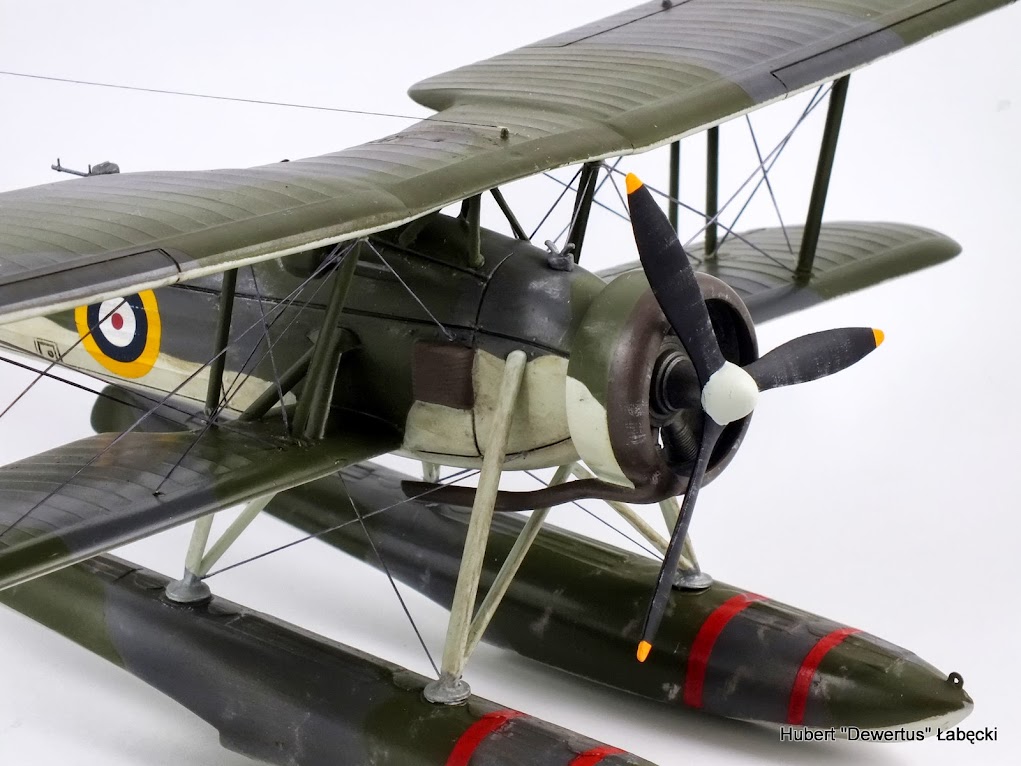 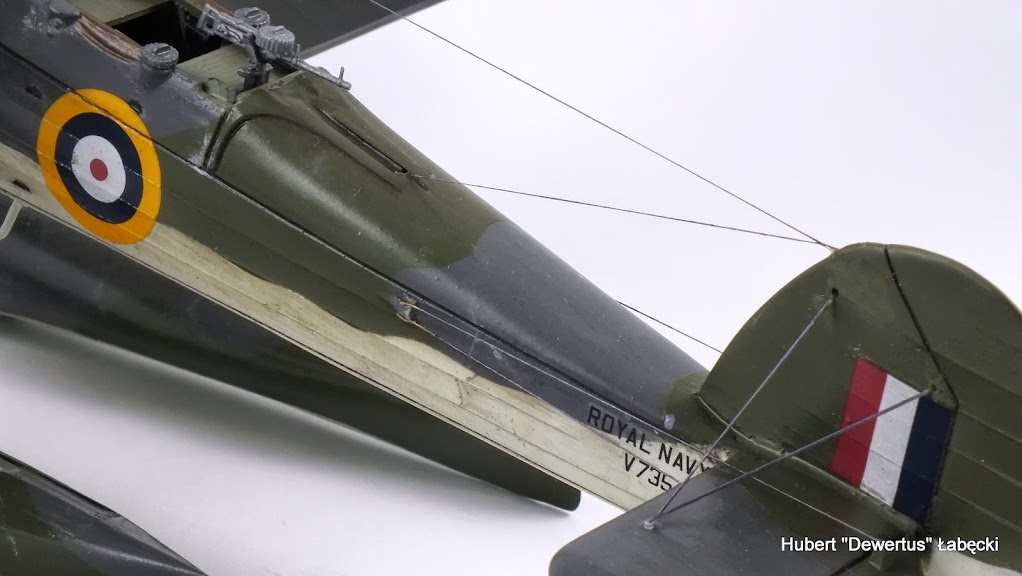 I like your build , very informative.... and altough an old model ..still looks very nice welldone........

I envy you for one thing

When I built my Smer Swordfish way back in 1993

Again as Marco wisely stated, you did a great job on such an old kit

Ray wrote:I envy you for one thing

When I built my Smer Swordfish way back in 1993

Again as Marco wisely stated, you did a great job on such an old kit

so true....but again this is a good job..well finished beautiful ugly bird
In nannu8)
Guest