This is the box art for the Warlord Games Cuirassiers set in 28mm plastic due to be released soon. 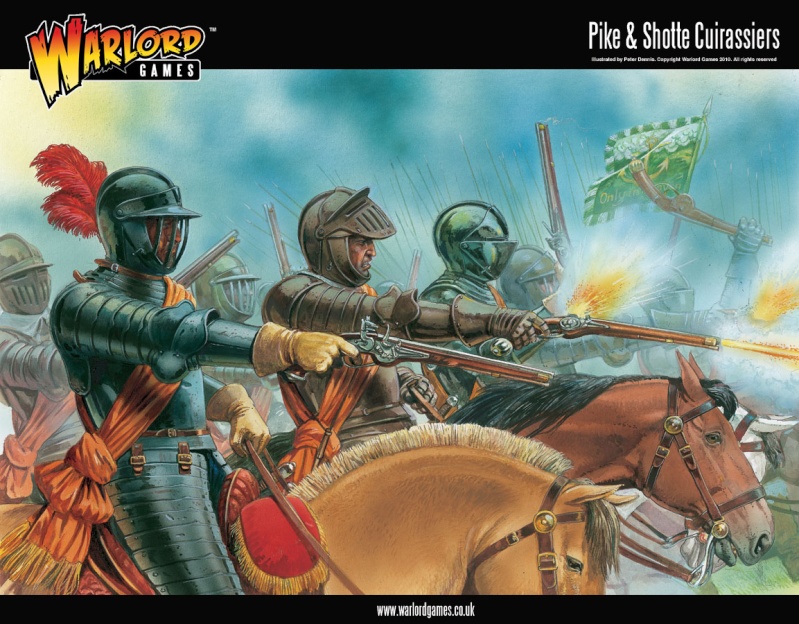 At our Armoury we have a very nice collection of Curaissiers suites, including the totenkopf helmets. looked like death heads skulls ... why they invested in a cavalry unit is very strange to me as apart from some raizzias and occasional deployment with forign armies the Hospitallers never saw land action while in Malta

I read somewhere that they had a cavalry stationed in Mdina. Am I right when I say that it was used to attack the Ottoman camp pitched at Marsa? Do you think the armour style of this set is close enough to the Hospitallers of that time? I know, I should do the research myself (which I will certainly do)not have it served on a plate

but I'd like to have your view as well and maybe insigate some discussion.
Ray

I'll be lurking behind you for sure ready to snatch the tit bits for later use as I intend to depict a mounted Knight of St.John at the time of the seige

What an interesting subject, i look forward to seeing your knight Ray.
alexbb

I STAND TO BE CORRECTED BUT CAVALRY DURING THE TIMES OF THE KNIGHTS CONSISTED OF HEAVY AND LIGHT MALTESE UNITS THE HEAVY BEING FORMED AND COMMANDED MAINLY BY THE LOCAL NOBILITY AND THE LIGHT FORMED BY WEALTHY LAND OWNERS AND BUSINESS MAN WHO PAID FOR THE REGIMENTS UPKEEP. IVAN CORRECT ME IF IM WRONG
alexbb

RayCaruana wrote:This is the box art for the Warlord Games Cuirassiers set in 28mm plastic due to be released soon.

RayCaruana wrote:This is the box art for the Warlord Games Cuirassiers set in 28mm plastic due to be released soon.

Thanks for the info Alex. It doesn't necessarily have to be the Great siege era, a small vignette of knights wearing ceremonial armour or something similar would still be interesting I think.
iCocker

Alex was spot on, these are 17c style, RayC woulb be more ideal using them for some kind of parade or ceremony, being pomponous as they were the Knights took every oportunity to make some kind of ceremony ... Still I wonder why they invested in a heavy cavalry at that period when they were not involved in any kind of land warefare, probably was a show of force, as this kind of cavalry was in fashion at the period ... do not forget that during the Knight's rule Malta was one of the Mediterranean super powers ... economy and navy.

RAY SOME INFO ON THIS CAVALRY
THE FIGURES DEPICTED IN THE BOX ART ARE MOST PROBABLY ROYALISTS. FOR ALL THOS OF YOU WHO ARE UNAWARE PIKE AND SHOT REFERS MAINLY TO THE ENGLISH CIVIL WAR 1641-51 BETWEEN THE ROYALISTS UNDER CHARLES THE 1ST AND PARLIAMENT LATER TO BE ABLY LED BY THE ONLY NON MONARCH EVER TO BE THE HEAD OF STATE OF THE U.K. I.E. OLIVER CROMWELL

THIS PERIOD IS INTERSTING FOR MANY REASONS, FIRST THE INTRODUCTION OF CONCENTRATED FIREPOWER ON THE BATTLEFIELD BUT MOST OF ALL BECAUSE THIS WAR WAS TO FORM THE FIRST FULLY PROFESIONAL MERITOCRACY BASED ARMY IN THE WORLD. THE PARLIAMENTERIAN NEW MODEL ARMY.

NOW FOR THE SET, THEY SEEM TO BE AS I SAID BEFORE ROYALIST CAVALIERS, THESE WHERE EXCELLENT WARRIORS WHO WHERE WEOPONMASTERS AND EXCELLENT HORSEMAN BUT AND THIS WAS TO BE THEIR DOWNFALL, BEING OF NOBLE ORIGINS DID NOT LIKE TO TAKE ORDERS AND HAD UTTER CONTEMPT FOR DISCIPLIN. THEIR ARROGANCE WAS TO BE THEIR UNMAKING. ONE THING WHICH IS BOTHERING ME ABOUT THIS SET IS THE PISTOLS. THEY SEEM TO BE FLINTLOCK AND I HAVE MY DOUBT. DAVID CAN CORRECT ME BUT SHOULDN'T THEY BE MATCHLOCK.
Noel Petroni

About 1630 the Flintlock replaced earlier firearms.

Thanks Alex and Noel re firearms. Very interesting.
Sponsored content