The canberra with the green repainted 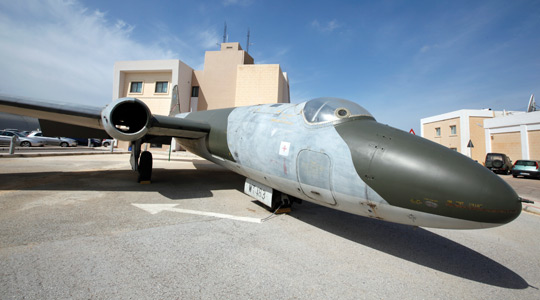 Looking much better. How i wish they find some covers for those engine intakes, they look so stupid empty. Its like looking through someone's ear and seeing right through to the other side. Even a mockup engine would do nicely as long as you don;t just see through.
David

I shall be doing those too.

I need to get a spinner profile

Where is this if I may ask?

Here is some info Ray

Quote from times of Malta


A former Royal Air Force Canberra bomber and reconnaissance aircraft has returned to Malta - on a ship.

Canberras were a regular sight at RAF Luqa from the 1950s right through to 1979 when the British base was closed. An example also featured at the Malta International Air Show before all types were withdrawn in 2006.

Malta Air Traffic Services bought this model from a private collector. Once re-assembled, it will be displayed close to the Control Tower at the airport, not far from where Canberras used to be parked in rows on the airport apron.

The aircraft unloaded at Malta Freeport used to carry the serial number WT483 and last saw service as a trainer 25 years ago. It was then parked at Long Marston Proving Grounds before being dismantled to be brought to Malta.

The Canberra will be transferred to the Aviation Museum at Ta' Qali once space becomes available with the building of a new hanger.

The Canberra - a twin-engined jet - entered service in 1951 and for years was one of the best bombers in the world - Britain even sold some Canberras to the US. The aircraft served for more than half a century, even seeing service in the first Gulf War and Afghanistan.

Ironically, in the first years of aviation, most of the first aircraft to be based in Malta also used to be shipped to Kalafrana, where they were assembled and towed to Hal Far airfield.

Sorry for my previous comments david, i did not realise that you were involved in this project. Now i know that it is in good hands and will be well finished. Maybe Ray Polidano at the aviation museum can help you for the profile you need.
Sponsored content