Here is my second model, so far I'm still sticking to cheap models, since the first one did not come out as expected, so instead of ruining a very good and expensive model, I decided to go for another cheap one. 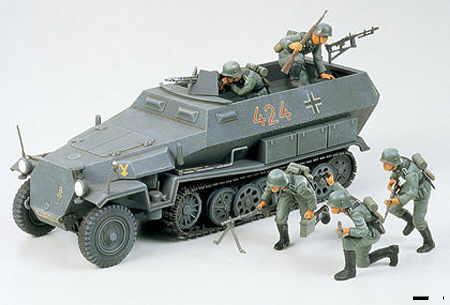 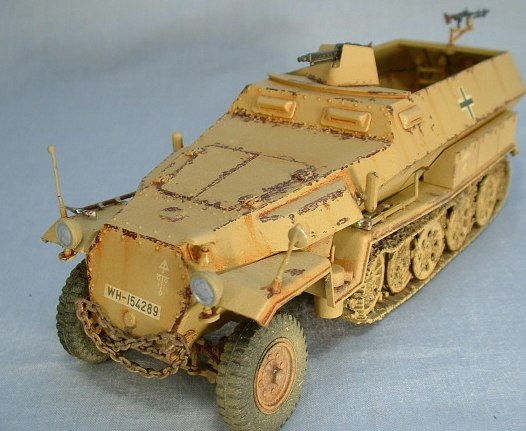 Any suggestions before purchasing the paint.....

I would also like to find some internal photos for the details, but I couldn't find much, maybe I was looking in the wrong places...
Maxi_Model

OK, so while assembling this model an idea came to my mind, I wanted to experiment a little on wrecks and destroyed vehicles, but I did not want to waste a model, not even if its a cheap one. So I decided to try and create one myself, simple, with not much details which will be half burried in rubble, showing some of its upper structure, where I will try the metal and rusting techniques I'm practicing.

These are a few photos of the copied halftrack I'm trying to scratch build, I'm new in this field but wanted to give it a try, if it goes wrong, it won't matter much since it will still be a wreck.

this is teh progress so far, I will add some more of its body, like floor and front grill, then the doors and hatches and to avoid making the wheels and tracks, I will burry that part under the rubble.

At this point I'm trying to find out how to add the bolts and rivets, I looked for a couple of tutorials, and mostly were to cur some stretched spru into tiny pieces, but I noticed that these won't be the same size since they are hand cut, this will also apply to round rods, unless there is an inexpensive scale cutter which I donno about. I also saw the punch and die set, but the prices were mostly over 50 euros which I found a bit expensive for a couple of holes and some punches (which i doubt they will be hardened. The other thing I found out were the rivet transfers, but again, I don't think they will look authentic since they will be flat and also the price is pretty high for a small sheet.


Any more ideas or suggestions?

Thanks for your comments, as already explained this scratch built will be part of a small diorama, and will be a wreck, and to avoid making wheels and tracks I will burry the lower half of this vehicle and also put some rubble inside it as it a building collapsed over it. I do not have extra wheels or tracks and donno how to make them, so that's why I will burry it.

maybe this can help

here I am again with a very little progress on this model.

In the little time I had, I managed to close the front part, added the inner floor, which needs a little more detailing (I wish to make is a diamond pattern steel floor), made the front hatches and back doors.

I also tried to add some rivets, but I gave up as they were not getting the same size when I cut them and so I stopped till I try the tool Alex suggested

So far I'm still trying to make this tool to punch out the rivets (when I find some time ) but now I came across another hurdle which to most of you is easy, to me its still a new world.

I want to create some parts and for this I guess I will need to cast in resin. Any suggestions for resin packs with casting material, purchase local or from abroad?

These were made with play dough and hot glue gun, what came through my mind at that time.

As worn tyres they don't look that bad, but the hub/rim looks hopeless, anyway this will be destined for a wreck, so covered with some rubble they might also work.
Maxi_Model

Is there anyone that can tell me if I can find locally, resin packs with casting material? I would like to use resin to make some parts.

In the meantime, till I wait for my mind to decide what to do for the rivets, I decided to work on something else so the work won't come to a halt. But it seems that everything I start touching regarding details, have to come to a halt.

I started working on the interior, not that I am going to detail it much, but I wasnted to give it some.

I started with the non slip floor plate which I moulded directly on the plasticard and then switched to the benches , I wanted to put some worn leather cushioning, even though this will be a wreck leather can take time before it completely disintegrates.

I started with the following, but some commented it looks like a chocolate bar

then someone else told me they look like flat sausages

then I tried to lighten them a little, so far I got no comments on these, but still expecting some.

I now got puzzled and cannot understand what is wrong, if the shap, the colour or both.......

Any help in creating leather seating (mostly worn) would be appriciated..

I'm no expert on the subject...

Unlike the figgy painters...but I believe the best leather effect is obtained using oils...it gives that unique sheen leather has....

that is oil paint I used, maybe its the way that I applied it that's wrong?
bcauchi

Just my 2 cents worth, i think you got the shape right but those are not the correct colours to use for leather. Besides, would those seats have been in leather or a covering like canvas? I doubt whether leather woudl have been used for those seats, more like a canvas covering.
Maxi_Model

by canvas you mean the impermiable material or the strong pourous bag material?

Also I found a couple of photos which show them as leather, that's why I made them like so. could be they were restored or something, since I also found photots with wooden benches

I had something khaki coloured in mind but those photos you put up show leather. I would go for that seeing those photos. Then you do have the wrong colours for leather. you need a good leather mix using oils. If you don;t have one just let us know and we shall give you one.
Maxi_Model

actually I do not have

my oils colour range is limited to only these

That is all I got (as for Oils)

Can you please help

The ones I painted I did them with the following procedure.
1. painted them with acrylic TAN
2. brushed them with burnt umber and after some minutes I removed the excess paint
3. brushed up some highlights for worn edges
4. gave them a thin coat of white and raw sienna for aging

Thanks for your help
iCocker

What you need to add to your mix is lynseed oil [Winsor and Newton has]... this gives a natural shine to the oil, do not bake the paint just let it air dry [bhalissa dan ir-rih iswel tiehu aktar min 3 ijiem]. Finally you'll get a semigloss finish, just note that ware and tear is better done in acrylics as normally that is matt ... hope it helps : )

OK this helps for sure, but is there any colour in particular to use with the lynseed oil to produce the leather colouring?
iCocker

Depends what coloured leather you are doing but the oil mixes with everything, I recommend Burnt Umber, Burnt Sienna, Van Dyke Brown, Ivory Black, Yellow Ochre, Juane Brilliant ... avoid whites to distress leather, use a flesh mix or ochres ... hope it helps.

For undercoats I like also acrylic flesh tints or ochres ...

This is an article I had done for Military Modelling Magazine http://www.militarymodelling.com/news/article/natural-leather/4546

Till I work a good finish for the leather seats, I am continuing the details on teh model itself (very slowly), I'm now working on adding rivets and I tried many ways, but so far the one that worked most for me was slicing a 0.5mm rod, I am trying to do a punch and die myself, since punching plasticard gets a more uniform result, I checked over the internet for the punch and die sets and they are not cheap..!!!

I'm also trying to find a way to make some hinges for doors and hatches, can anyone suggest some method, I'm a beginner not a pro, so be gentle

This is the result so far

LOL I am building a model from scratch, when I haven't yet mastered building a boxed model

I think you are doing a fantastic job of it too! Keep it up.
Ray

Great work so far & remember that "Who Dares Wins"

May I suggest downsizing your pics before you post them, so that all the pic fits in the screen please

Can anyone advise if I can find good 2 part resin for casting in local shops? if yes where and what brand.

these are some parts of teh front axel and the toolboxes