... I had to get back to the fields I love most, middle-east and africa conflicts and the uprising not far from our shore got me back in modern material, especially with the feast of 70s soviet arsenal deployed and revived I had to start a new project ...

One of the first implement is going to be the famous IFV - the BMP1 being heavily used by both sides of the civil war. Unfortunetly the only game in town are very old Dragon and Esci offers, the laters reviews say a bit better but both inaccurate. I had an onld DML in my stash and planned to have a go, only to be eddicted with TLC as the kit is a nightmare a cross between a toy and a model, many things wrongly done and needing much updates to bring it ... but seeing what people are doing in this forum, taught to revive an oldie ...

So here is the progress so far ... basically did not use any available PE which is vintage so I had to DIY! Plastic had to be thinned down, plastic card and welding added. The extras so far are resin wheels, idlers and tracks [not shown] as the kits are off! 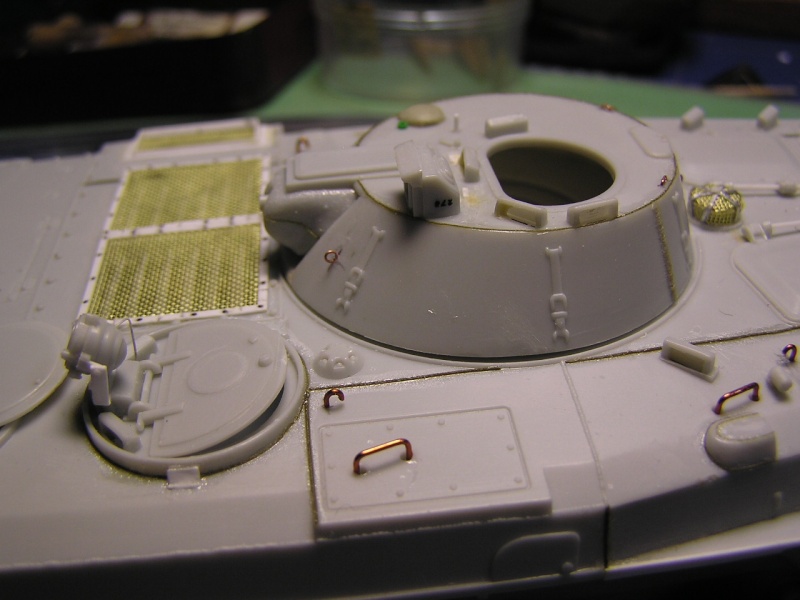 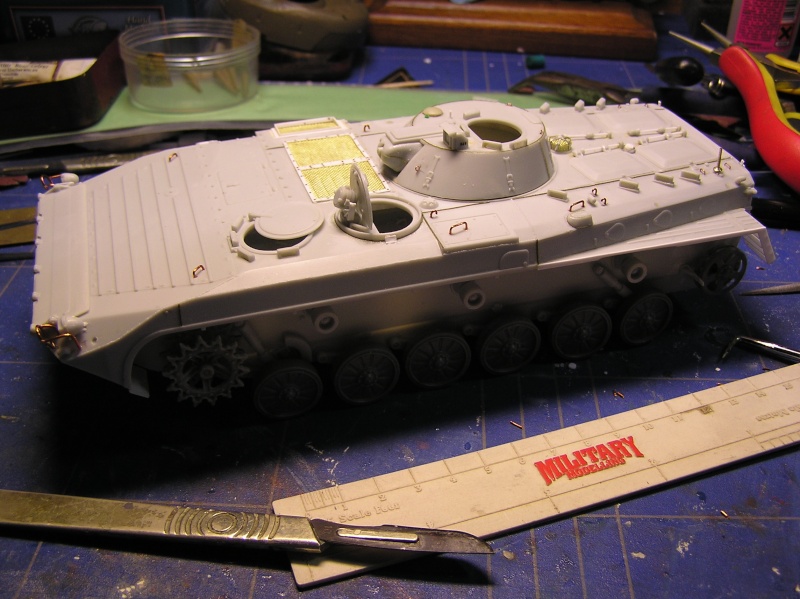 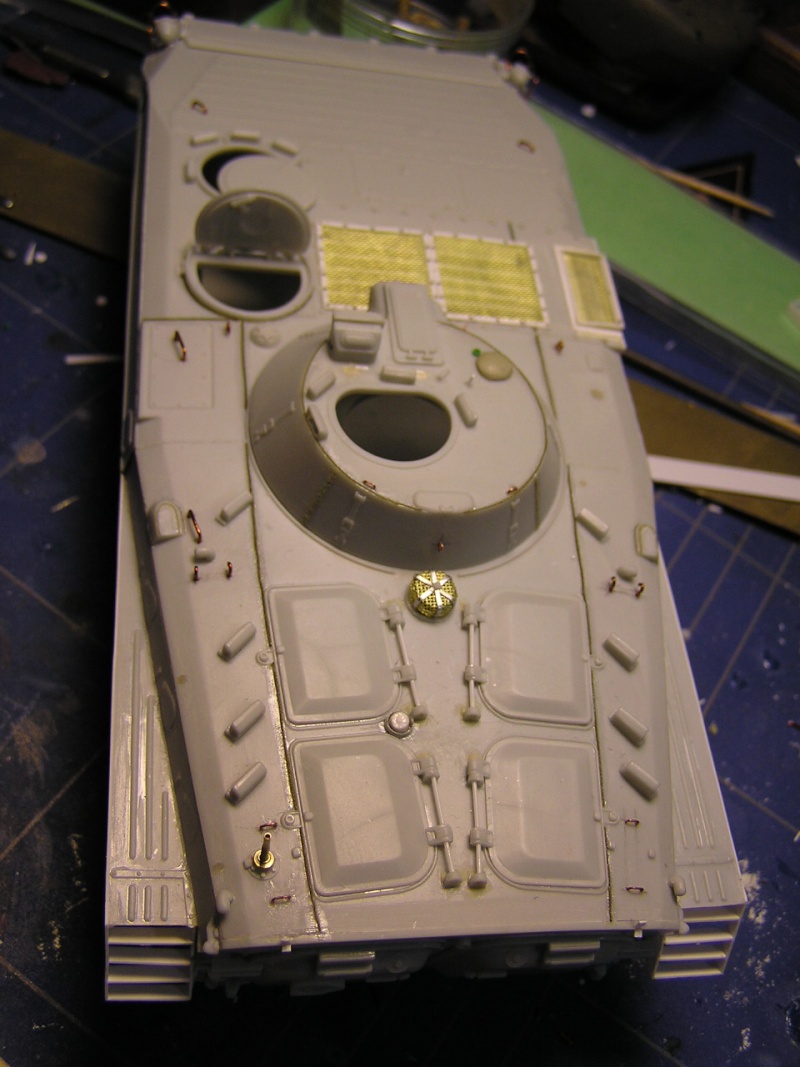 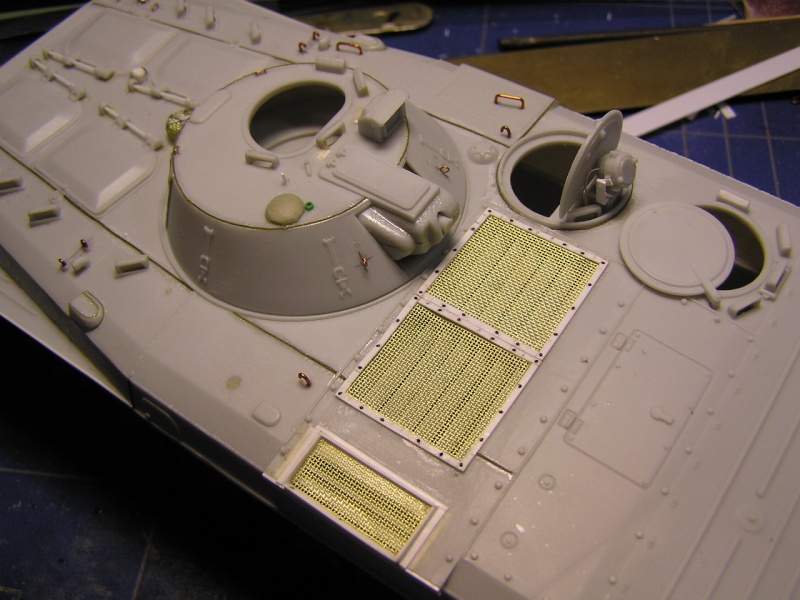 From the intelligence I gethered till date, I got the usual soviet green, desert and 3 tone versions of desert green and brown ... no greys like Mirages

PS by the way we have two more mirages now to debate, but at least these seem to be in natural metal so not much of a debate issue there ....... or is it?!!
Guest

Is this the BMP version that burns easily, killing all inside when hit on the rear??
iCocker

J.Fenech wrote:Is this the BMP version that burns easily, killing all inside when hit on the rear??

Though an aging veteran the BMP1 was one of the first designs that created the IFV range, small personel carrier that can deliver a punch in support of infantry. It's low profile and speed was a hit way back in the 60s/70s.

The debut of the BMP1 was during the Middleeast conflict between Syria and Israel, though not that it made a difference due to bad leadership and co-ordination by the Syrians but on the other hand it's design did ...

Infact it gave way to many more designs and also got NATO and IDF creating similarities like Marders, Bradleys and Warriors though strange enough NATO always liked high profiled vehicles ...

Today its grandson the BMP3 is probably one of the best IFV around and the most feared!
alexbb

all bmp variants where innovative in deseign but this did not mean they where good. the very thin armour and crammed interior of the bmp 1 and 2 proved to be the biggest disapointment, what made them unique was the concept behind them. before the bmp we had box like armoured troop carries such as the m59 m113 m114 fv432 and btr 50 which where simply troop taxis and as such could not be deployed on their own because they lacked defensive and offensive weapons. the bmp changed this by placing a mid calibre gun and guided a,t, missiles in a fast all terrain vehicle this however at a cost of light armour and very cramed interiors. the bmp3 goes a long way to rectify these faults but apart from its offensice capabilities it is still a long way off from the bradley, warriors, the new generation marder and swedish cv90, the irony is that the chinese produce a derivative of the bmp3 but uparmoured, equipped with western technology and a more powerful german designed engine

having said this however ivan you have guts. you chose the dragon over the esci kit and beleive me it needed the work you put into it . the esci kit although far from good is still a lot better than the dml one
anyway im sure this is goining to end up as another winner definetly sure.
iCocker

Yep Alex I agree on all fronts I am paying for not choosing the hard to find ESCI model ... but then again after the last BT7, the ongoing BT5 saga ... I am getting the pleasure of correcting these odd creatures ... if I manage!