But that is a masterpiece in the making IMHO

Prosit Alex, keep it up!

Another crazy Alex on the Forum, that is awesome work you are doing. it is going to be the mother of all Vulcans, your work is excellent accurate neat and thorough, i am dying to see all this detail painted. Keep it up!!!
Wayne

thanks a lot for the encouragement.... still a long way to go but hopefully we'll get there.

It's about-time for another update on this build.

The major tasks related to the scratch building of the bomb-bay area are now complete and everything has been assembled in place. These were complemented with the scratch built nose-wheel well walls as seen below. 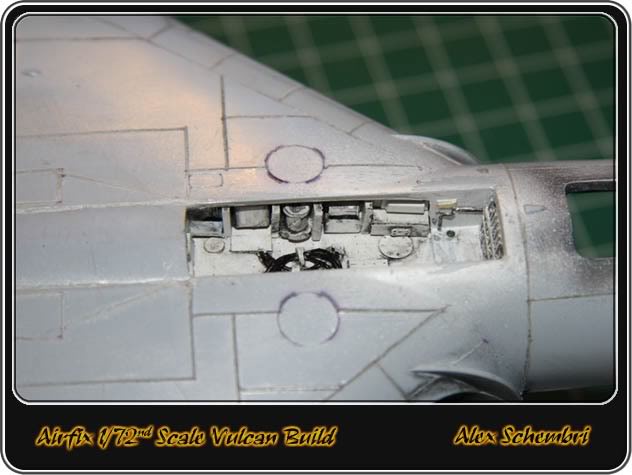 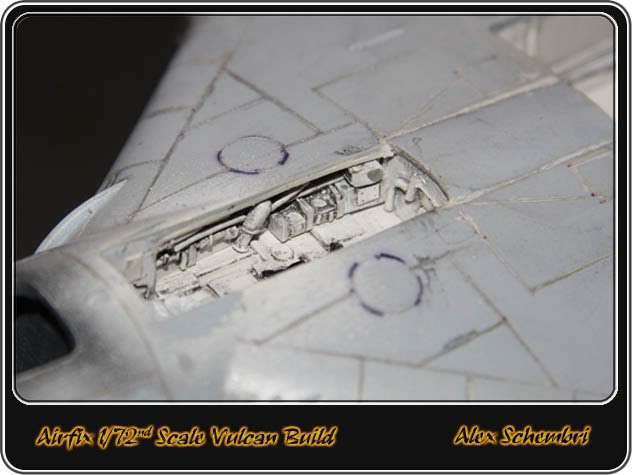 Other tasks off the list were the undercarriage legs and wheels. The main legs were treated with the Flightpath PE cabling, torsion links and front grilles. All were sprayed black and lightly drybrushed with aluminium just to get some contrast and sheen. Flash in photos shows this a little too bright. In actual fact they do not gleam as much. 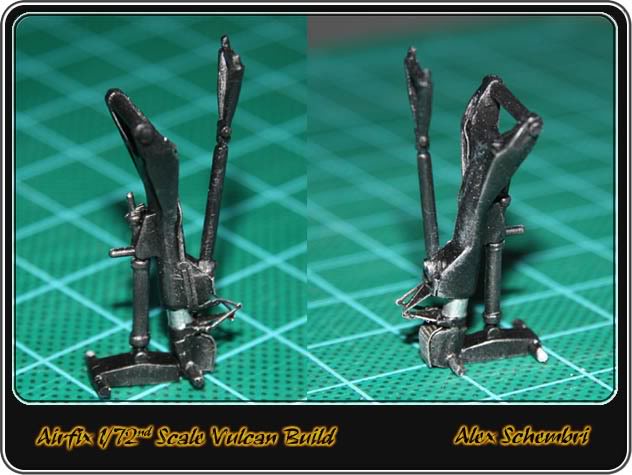 Wheels were fitted with PE discs, sprayed black and drybrushed in aluminium. Tyres were then painted Model Color Dark Rubber. 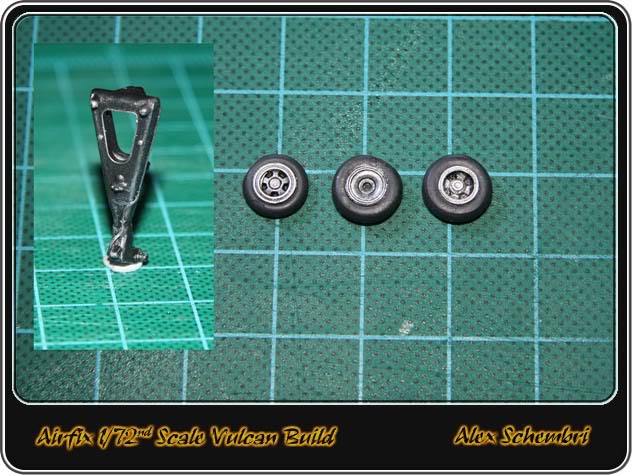 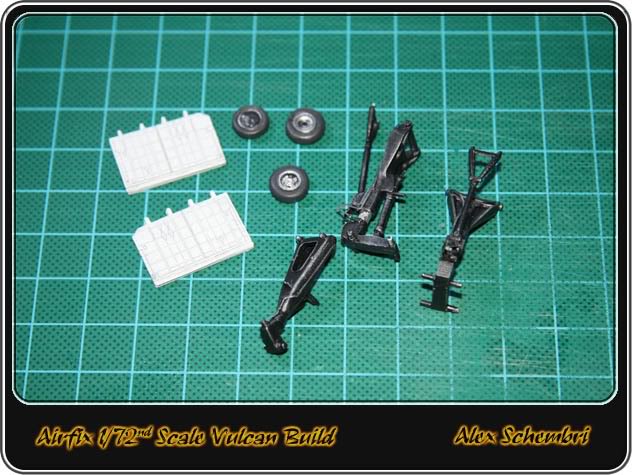 So here are some general shots of the bomb-bay area. 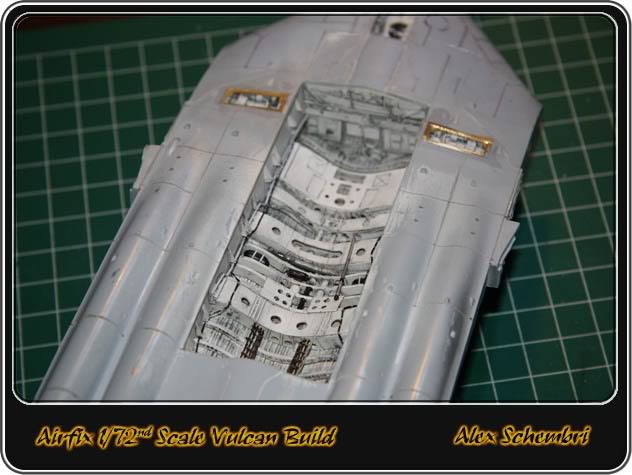 This is the back-wall with the various wiring assemblies and connected piping. 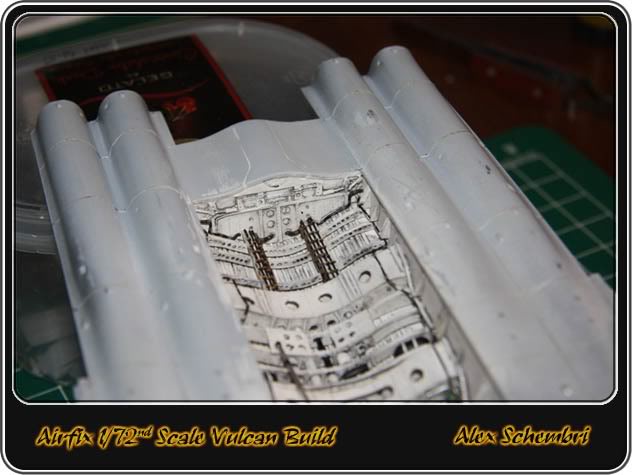 A general view from above showing all the main components 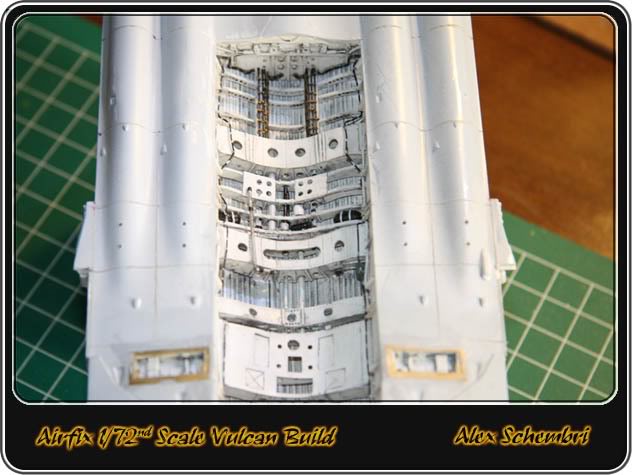 Here are the structural members that make up the bay with the added plumbing, piping and other bits and pieces. 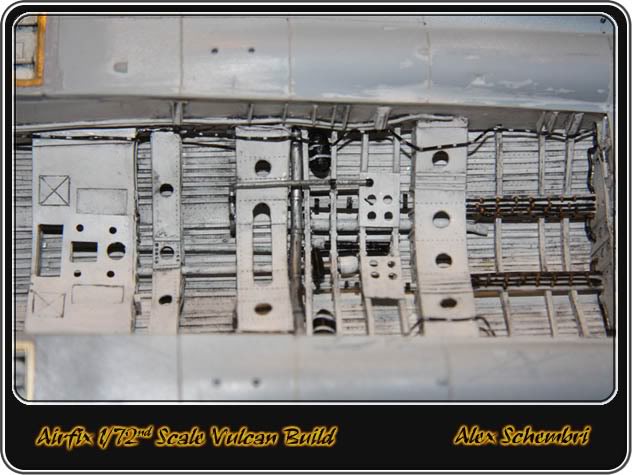 This is a view pointing towards the forward bulkhead 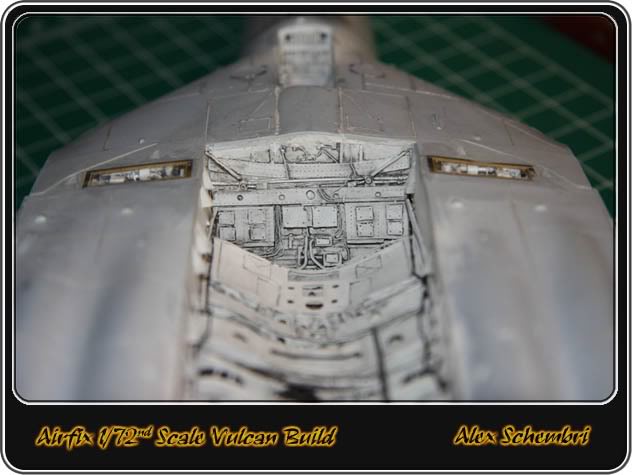 And another view towards the rear bulkhead 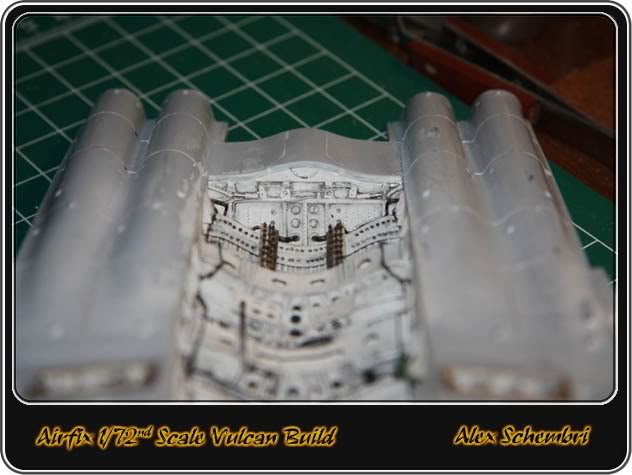 These are various other views. The roofing proved a little tricky to fix in, partly because it had the ribbing attached and also due to the arched design of the components that it had to cover.

In fact this had to be done in various stages, fixing the center area first to ensure alignment, letting that to dry thoroughly and then tackling the laterals one by one using adequate pressure to ensure a consistent fit. 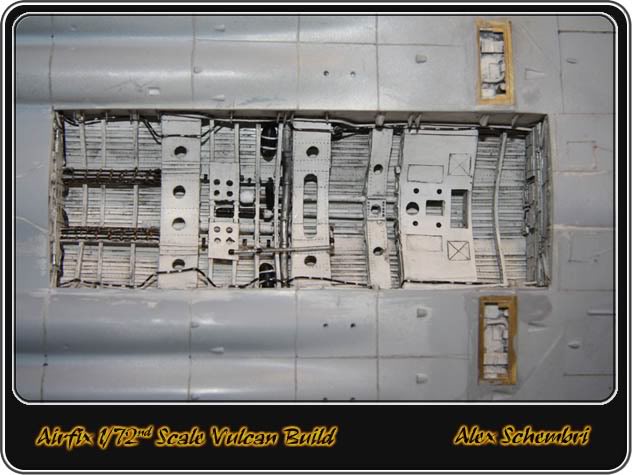 I was lucky to have some metal tubes that fitted the contours of the ribbing members perfectly. I placed these with the help of rubber bands across the roofing sides and could then feed in spots of super glue from the outside to help the roof to adhere to the ribbing. 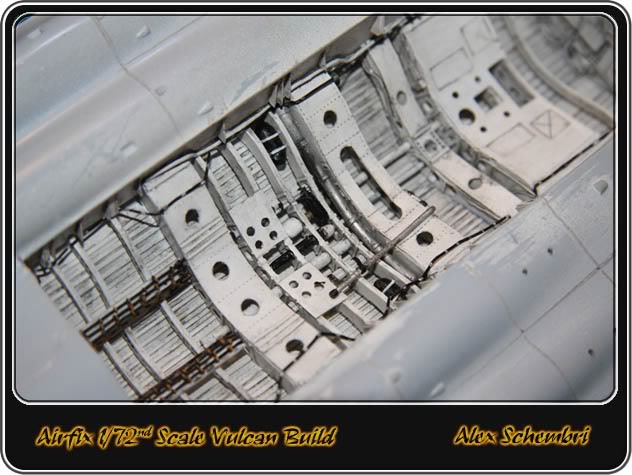 Here is the "roof" component from the inside when it was fully dried. I also managed to spray in a coat of aluminium. 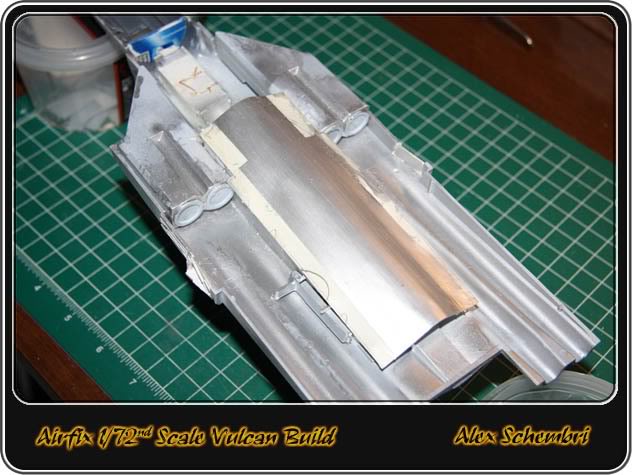 In addition to the bomb-bay, I also managed to assemble the two scratch built lower air-brake housings and covered them with the PE framing provided in the Flightpath set. These had been previously sprayed white and weathered as necessary. 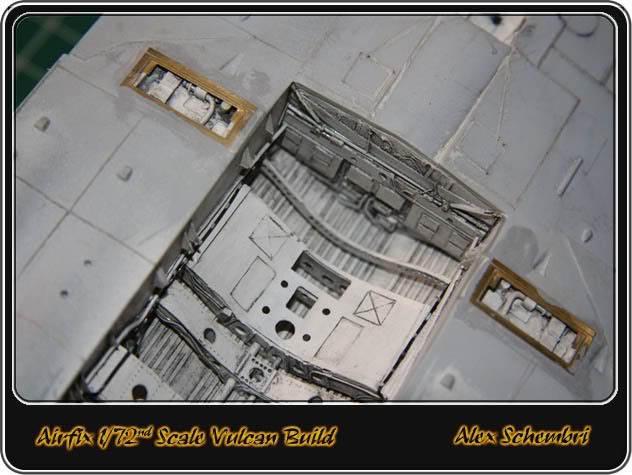 Next up will be the upper air-brake scratch built housings, the assembly of the detail in the crew entry area and finally the joining up of the fuselage halves.
I will then proceed with the fitting in of the wings and re-visit the scribing job that was left in a partial state until after major construction due to the huge amount of filling and sanding that I foresee will be absolutely necessary following this stage.
I'll try to re-post another update in between the major steps mentioned above.

Awesome work Alex, complimented by nothing less in photography

Keep it up & don't be a stranger on Wednesdays

Yes Alex bring the model to the club , we wnat to see the fantastic work your are doing...
Guest

Have to check this out at home Alex, can;t see anything but red crosses at the office.
bcauchi

Alex you are doing one hell of a job with that beuty! The detail is breathtaking and the painting in my opinion is spot on. Not easy to paint and weather white and you have done it perfectly! Awesome work.
AdriaN

ascomt... what is the 'promodellers wash' like? any good?
Tancred

Amazing work Alex, keep it up!

Thanks a lot for your comments and encouragement. There's still lot to do and your feedback is a true booster.

I must say that with this being my first attempt at scratch building, I am truly satisfied with the results so far. I hope to continue along this path and achieve a satisfying overall result.

Marco, I planned to bring the model to the club once that the fuselage halves are joined so that I avoid carrying too many loose bits around. Also,in that way, it would have acquired the full shape and render an idea of how it will finally look.

Brian and Adrian, I've come to appreciate how a simple wash can bring to life an otherwise bland white coat.
The Flory Models wash (as it is now known) comes in some 7 different shades ranging from white to outright rust. He also has a range of pigments but I haven't had the chance to use these yet.

The wash is clay based and really simple to use - just brush it on, leave it for some 20 min and then come back with a damp tissue paper and wipe off the excess. It is most suited for panel lines but can be used for any type of weathering, as can be seen in my case here. I've also seen a video build by Phil Flory himself, where he intended to "dirty" the white areas of a Trumpeter 1/32 Fairy Swordfish. He sprayed the wash in such a way as if he was giving the model a power wash, letting it flow along the sides and wings. When dry, the effect was amazingly real. I'd recommend the wash to all - use the link above to watch videos of it's application.

I also hope re-organise myself a bit to have more free Wednesdays so as to be able to come to the club meetings more often. Thanks Ray for the renewed invite and encouragement.

Yes i know a lot about the wash and ive seen his videos. but im asking how did YOU find it??
ascomt

as I said, I'd recommend it to all. I have 4 shades out of the whole range.

In this case, inside the bomb bay, I used the Dark Dirt because since I am modelling XH558 as it is presently (or so I humbly hope

), I did not want to get a look that's too old and worn. XH558 has been practically rebuilt and in most areas repainted afresh - so I am trying to get a partially worn look - just to bring out the detail.

As explained in the previous post, applying the wash is just a matter of brushing it on with a wide brush (as wide a brush as you deem necessary depending on the model), wait some 20 min for it to dry up and then wipe it off with a damp kitchen towel. The amount of wipe off should also depend on the level of weathering that you require - if you wipe off too much - no worries - do it again. As long as you do not seal the wash with any lacquer based varnish, you can always go back and "correct" any missed spots.

Hope to have explained well.

Aah cos some people say its great... Then others say it comes off in certain areas ex. shallow panel lines. or dries all clumpy/dotty on glossy surfaces (like had happened with me and oils)

I use watercolours. similar to it as presume

only a damp tissue will take it all off. tissue HAS to be dry. its hard to get a solid line in shallow p.lines
ascomt

Well Adrian, I guess that water colours won't appreciate a damp tissue rubbing them off

(sorry - very rudely put there). I use acrylics and even though they dry almost instantly, I left at least 24 hours (a lot more actually - my scale modelling time slots do tend to be rather far and in between) before applying the wash.

Also, if you consider the case when applying it on the model surface (as in the case you mentioned), this would be done at the last stage i.e after having given the model at least a couple of coats (even more than a couple actually) of either Future or whatever gloss varnish you prefer; applied your decals and re-sealed these with gloss again.

Such levels of "protection" to the paint should suffice as to prevent it from coming off when you come along to rub away the excess wash, I guess.

I used this same technique on my 1/72 Sea King. It worked like a charm - sometimes I even think that I might have left too much on, but apart from that, the process was just as I described and went on smoothly - and with the decals already in place and sealed in.
In that case, there was white paint as well and the panel lines stood out quite proud of the white colour. 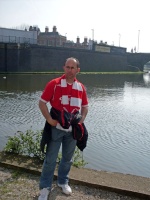 By the way Alex, the bomb bay stole the scene but your undercarriage is also really well done.
ascomt

It's been quite a while since my last posting however I have registered some notable progress in this build, namely by reaching the stage where the Vulcan is now fully assembled and on it's way to the finishing up and painting stage.

I had the opportunity to reveal this completed stage, both at the Marathon organised in December 2011 and at the club, and would like to take the opportunity to thank many fellow members who took the time to appreciate and critique my progress.

The suggestions and comments that many forwarded were invaluable in helping me to correct some of the more notable flaws, that were mostly related to the problems encountered

whilst joining the not so "joinable" fuselage halves.

This in fact led to the loss in the nose curvature, mainly due to my over zealous sanding of the filler applied to the nose area. However, out came the good Band of Brothers that you SSM members (

) are and promptly provided guidance on how to apply, shape and sand Milliput to regain the lost profile. I followed this advice carefully and as you'll be able to see from the photos below, the problem was overcome to an overly satisfactory result. 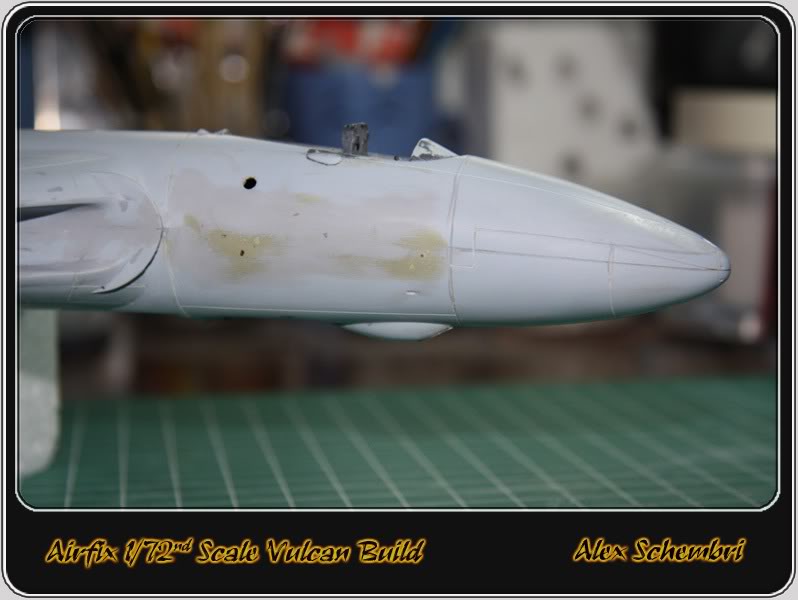 Milliput still visible under a sanded coat of Mr Surfacer 500.

Next report will hopefully come from the paint shop.

Till then......Thanks again for watching.

What a beast! Looking forward to seeing it painted...and weathered