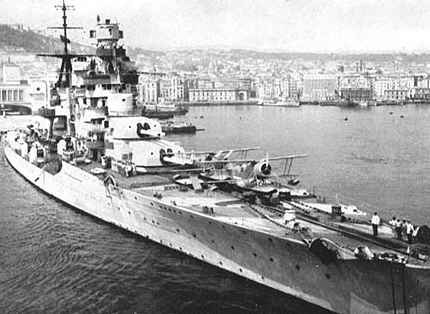 Here is a brief history
The Regia Marina Pola was laid down in Livorno in 1930 and commissioned in 1932. It had a displacement of 13,531 tonnes and was a Zara class heavy cruiser.
After the lull of the 30's and the start of WWII, Pola was the flagship of Admiral Riccardo Paladoni who was the commander of the 2nd Squadron. It took part in 12 actions. It took part in the Battle Of Cape Matapan where it's fatal destiny was decided. She was immobilised after being hit by a torpedo from a Fairey Swordish. Admiral Lachino ordered the remaining Zara class cruisers and 4 Oriani class destroyers to rescue the Pola. The rescue group's route brought them directly within the range of Admiral Cunningham's force which included HMS Warspite. All the rescue ships were sunk !.
A British destroyer HMS Jervis went alongside the unresisting Pola to rescue the wounded , 275 in all. Efforts to tow the stricken vessel to Alexandria were impracticable. It was then sunk by torpedoes by Royal navy destroyers. HMS Jervis and HMS Nubian.

Looking forward to this build...

This is the colour scheme...however the forward deck should be dark blue 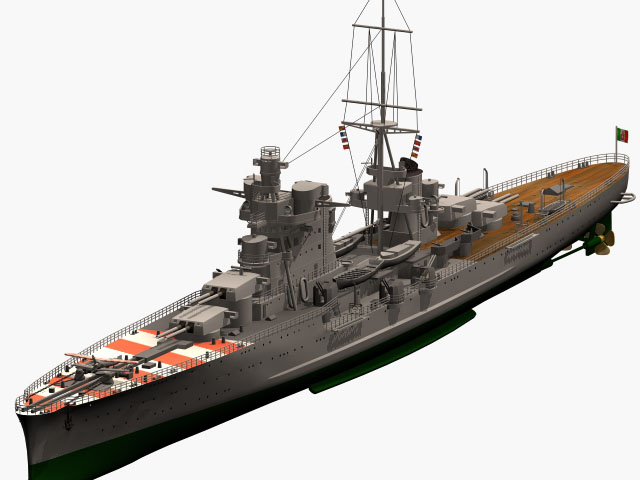 tajba Paul ...next one after this is the KONIG....so that should make you happy

Check if the Italians had a dazzle colour scheme - especially during 1943 and 1945. That would be a wonder.
Ray

Go Nannu Go as it will be another STUNNER

Ray wrote:Go Nannu Go as it will be another STUNNER

Check if the Italians had a dazzle colour scheme - especially during 1943 and 1945. That would be a wonder.

Paul yes that would be a very attractive scheme but if I use that camo scheme I will have to omit the red and white stripes on the bow of the ships , so I am opting for light grey finish....still will be attractive as the fwd and midships deck is dark blue....

this is the colour scheme... 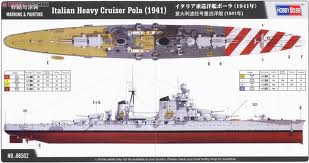 Hello Louis,
I wouldn't be so sure about that. Both the Roma and the Vittorio Veneto together with all the heavy cruisers had the dazzle camouflage whilst retaining the red and white areal recognition stripes.

Next meeting, I shall bring you a 3D of the Roma.
Paul Salomone

Some pictures of the battleship Roma.

These pictures are related to the computer imitation as used for the official movie (Inferno di Fuoco) - Hell of Fire. 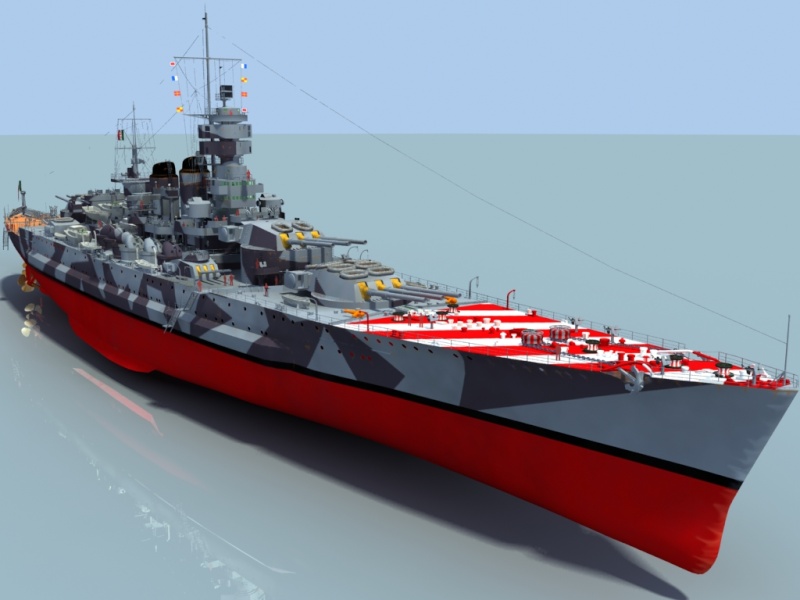 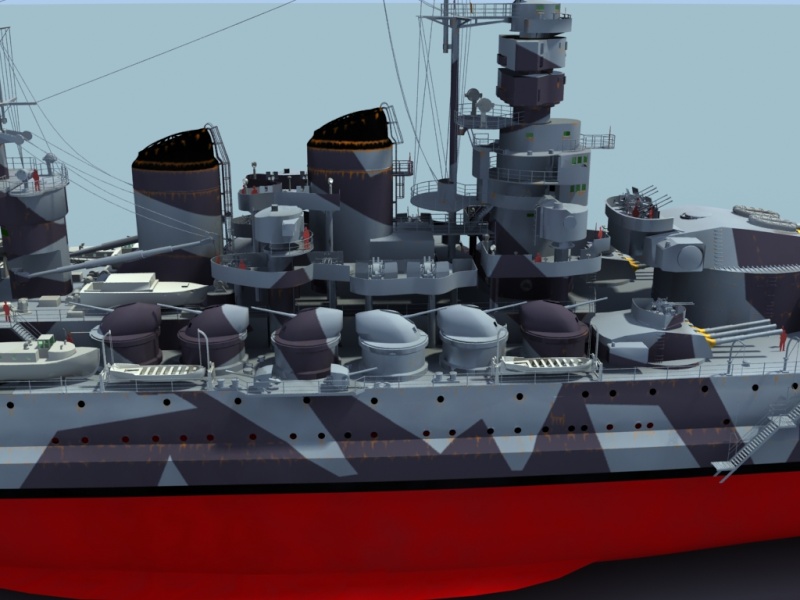 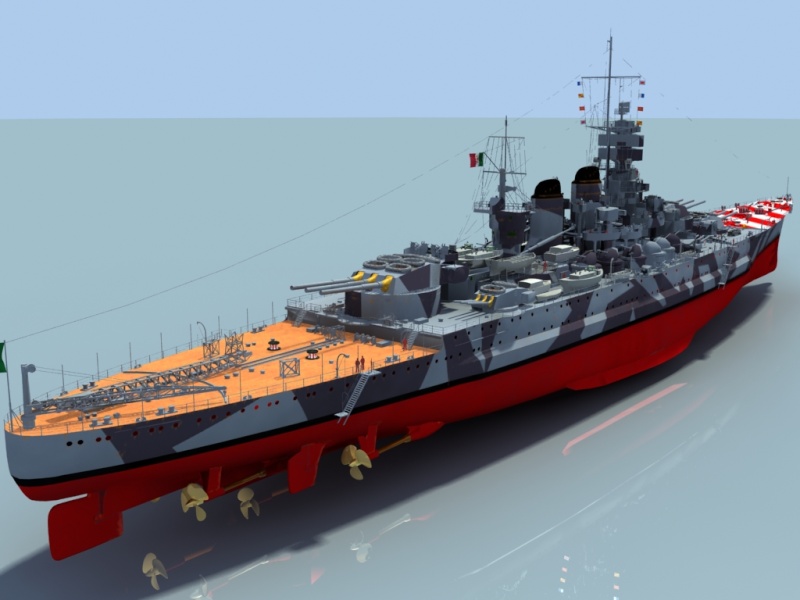 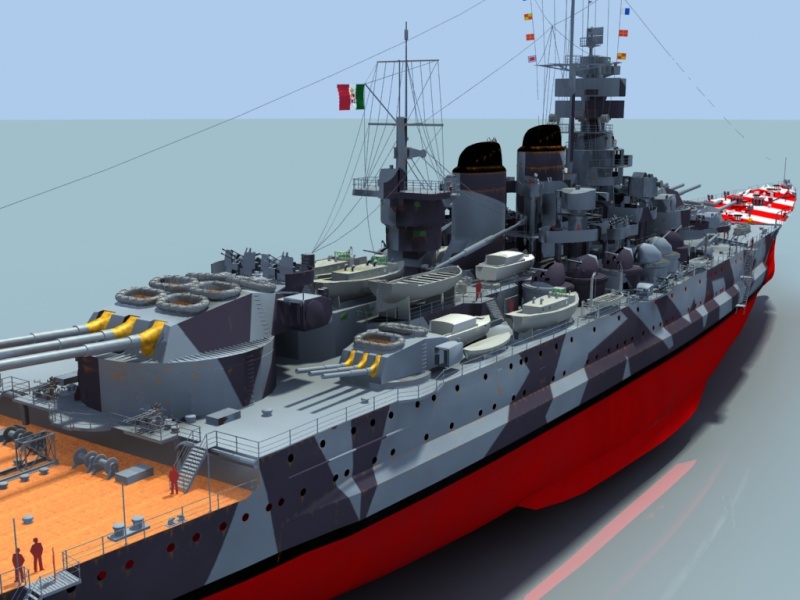 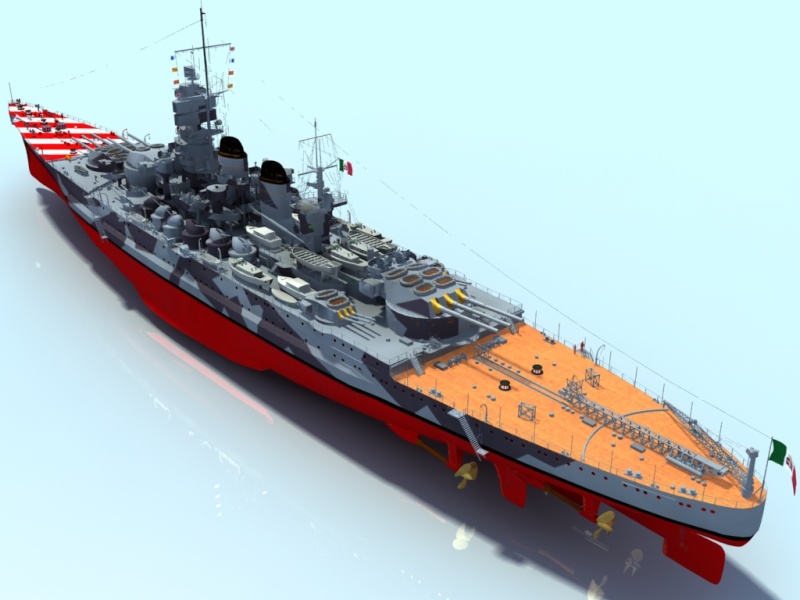 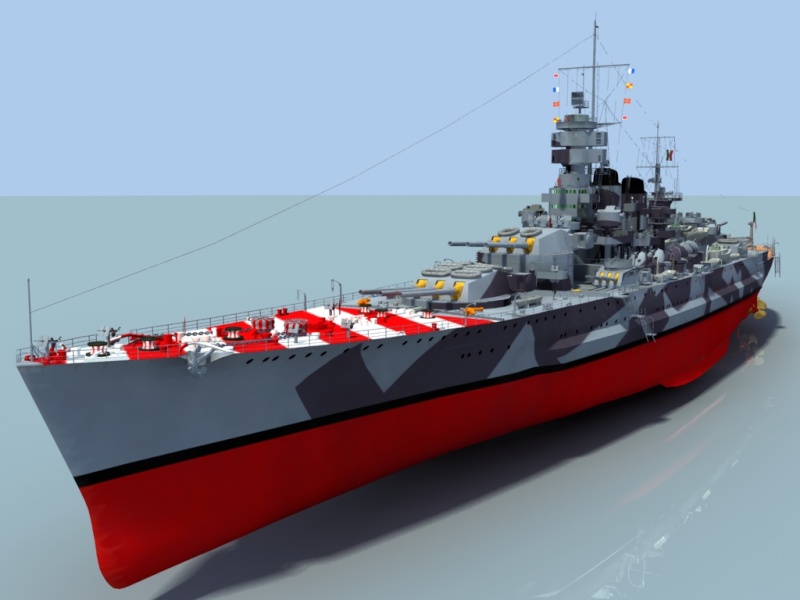 But those stripes make her more visible in action...

Some pictures of the battleship Roma.

These pictures are related to the computer imitation as used for the official movie (Inferno di Fuoco) - Hell of Fire.

Attractive yes very attractive... but as far as I know the forward and midship deck should be dark Blue and not grey...
now the problem is that I have never seen any pics of the Pola sporting a camo scheme...not saying that it didn't have it...but wud appreciate if you know where I can get some...

....I think it's better to take the easy way out

cause I 'm starting the Konig with it as well

In nannu
in nannu pec

in nannu
in nannu pec

this is only pic I found of a camo painted heavy cruiser but it's the 'Gorizia' which has disimilitarities in the forward superstructure. 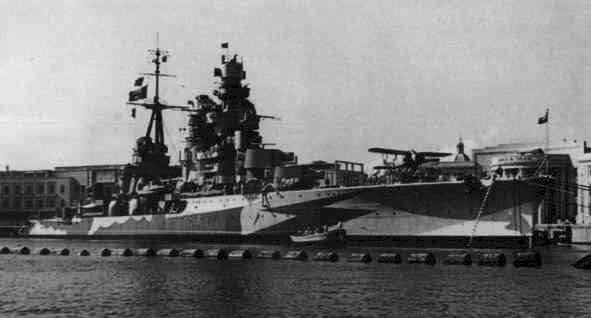 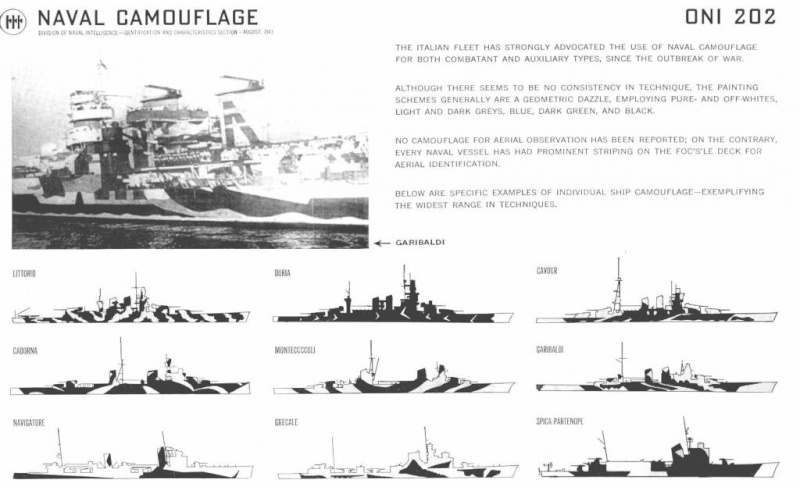 as you can see the Pola is not there and further research indicated that the vessel was sunk at The Battle of Matapan before it even got the chance to sport a dazzle camo scheme...so it has to be an all grey finish...I'm afraid, but it will still have a striped fore deck and and dark blue in the midship decks....the aft deck will be in wood laminate...

Thanks xorta Paul
in nannu

Have started works on the Pola....forward and midship decks sanded clean and had to be scribed and detailed....more fine detail will be added once the Taghna llkoll finish will be applied

Top of mid ship supertstucture had to reworked and scratchbuilt as kit offering is incorrect...now working on the midship and bow deck 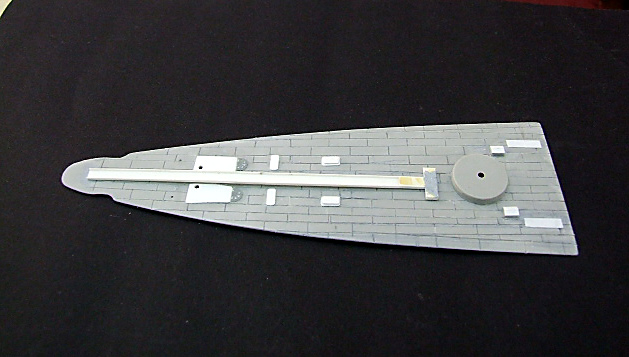 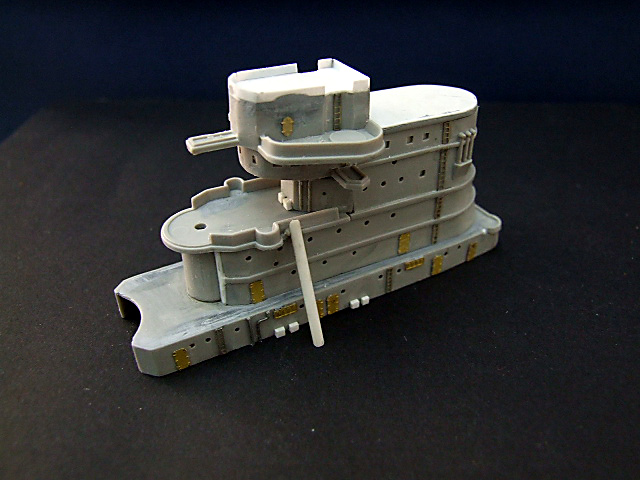 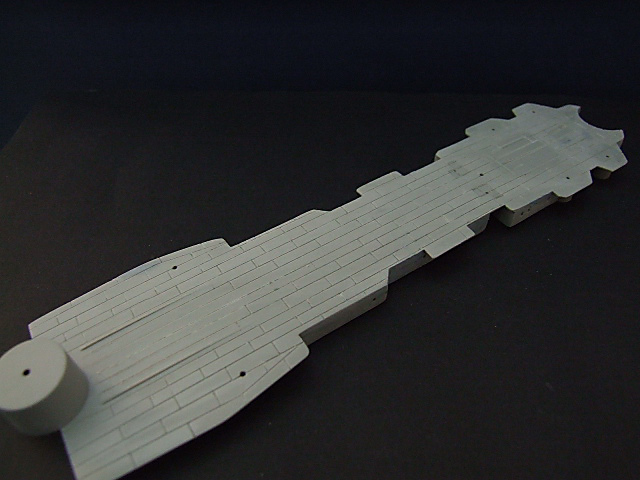 Another big one ...coming up..

U mela ejja nann! let's get to the build, great going but this is going to take a lot to beat your recent effort, that was one hell of a build.
Paul Salomone

I have a funny feeling that this is going to be a master piece. Keep it up habib - the detailing looks superb.
Ray 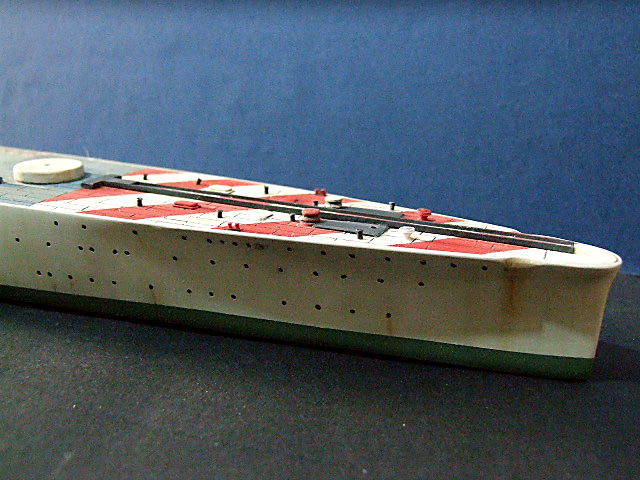 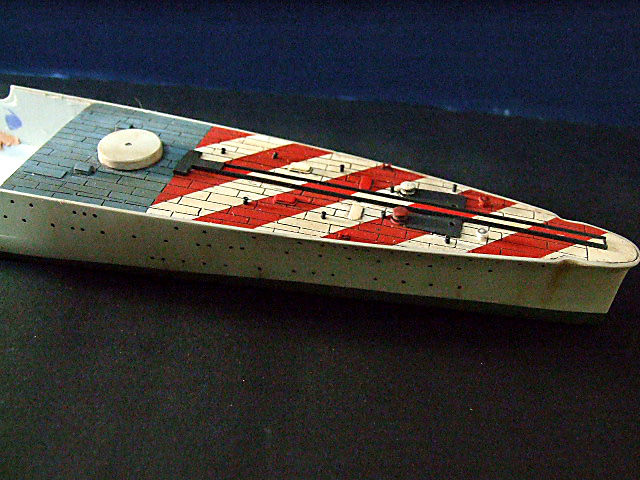 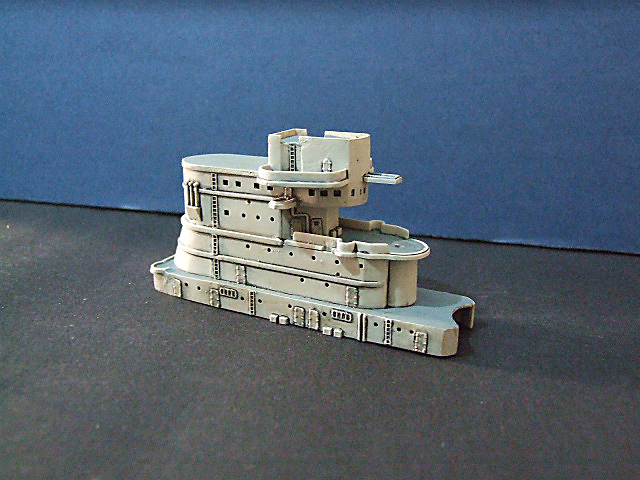 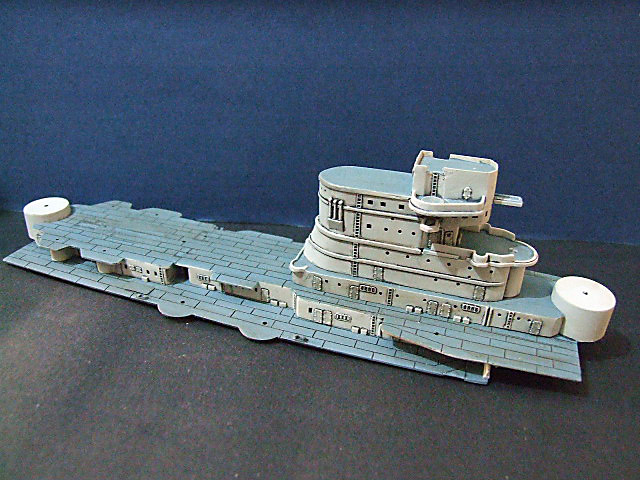 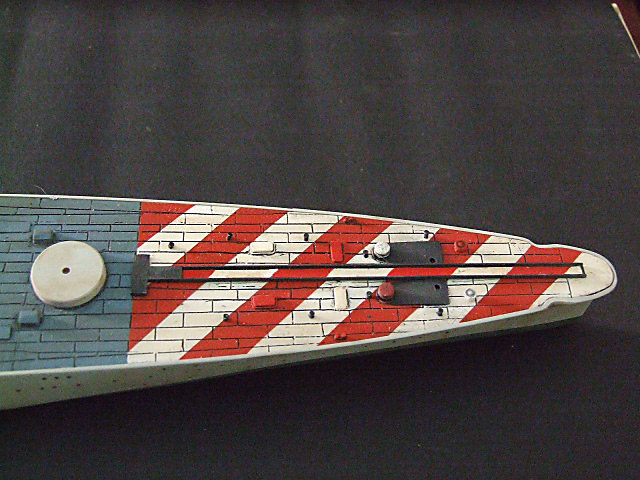