Sent for Model Cellar's Werner Voss in 1:48, which I hope will be painting soon. Was thinking of putting him beside 160hp mercedes engine, which Alex the Greek and Marco helped me in finding. Ivan, suggested the idea of a Bentley engine instead to add more interest.
Ray

RayCaruana wrote:Sent for Model Cellar's Werner Voss in 1:48, which I hope will be painting soon. Was thinking of putting him beside 160hp mercedes engine, which Alex the Greek and Marco helped me in finding. Ivan, suggested the idea of a Bentley engine instead to add more interest.

Alex and Marco, I guess I have no other option then to go for the Vector resin engine because Aero club's website will be unavailable until further notice owing to the loss of Mr. Peter Wright (52) of Aeroclub Models who died suddenly on March 8th. while on holiday in France. May God bless his soul.
RayCaruana

This is the setting which I have in mind for this vignette. Any critism and ideas are most, but most welcome... 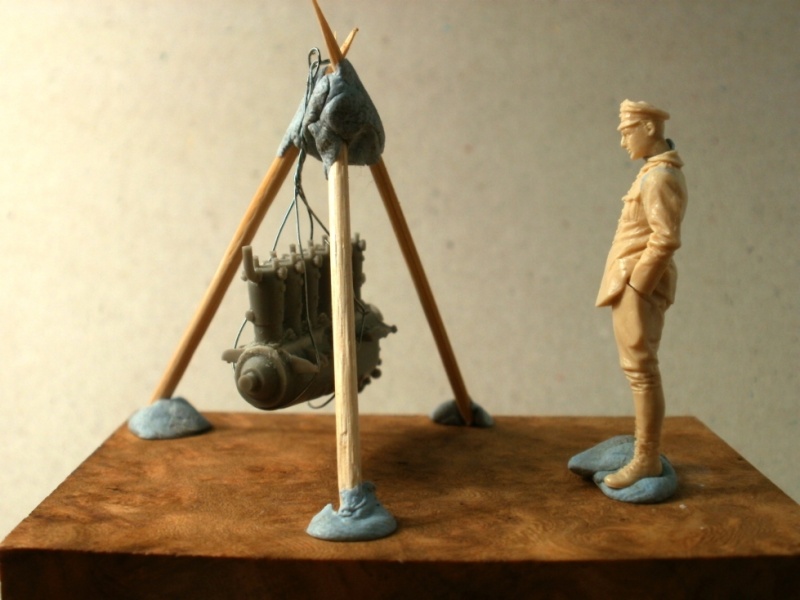 A relaxed Werner Voss is definitely fitting to your nature

Joking apart, the setting looks good. Think about adding some tools or anything that fills in the floor around a hauled engine if I were you.

Thanks Ray:-) I will take your suggestion and start looking for a tool box and some tools.My only headache is for the engine and chainblocks coz I never built an engine before and the chainblocks has to be scratchbuilt

I will certainly need some mentoring from the aircraft buffs this time.
Ray

Look for photos as reference to "fill up" as I suggested, as I made a blind suggestion sort of

Comeon, it is child's play to build something of the sort, especially with ALL the help you'll get from everyone as usual

this is the picture which inspired me... 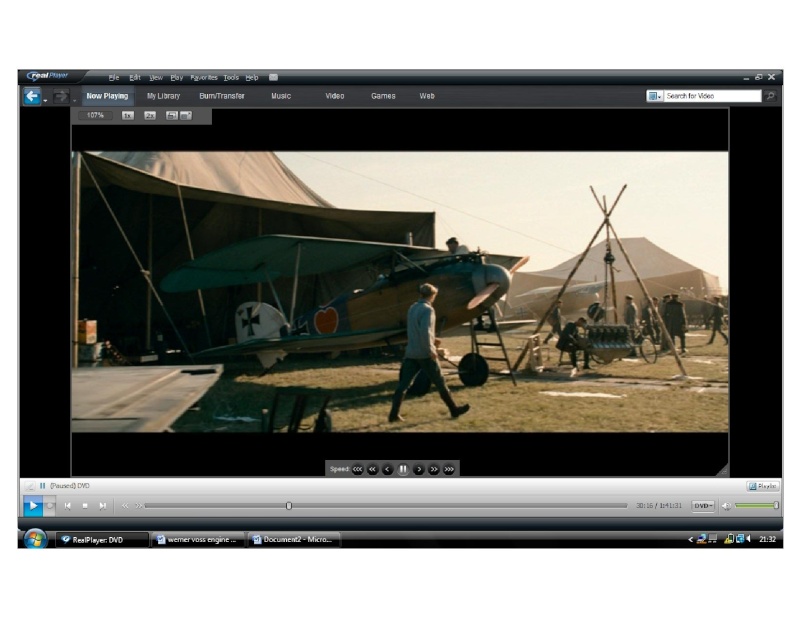 [quote="Ray"]Look for photos as reference to "fill up" as I suggested, as I made a blind suggestion sort of

He's one of the mentors I mentioned

Nice set-up. Why don't you go a step further and include the mechanice working on the engine, thus Verner with that relax pose looking, and the DII in the tent

. I am willing to be your mentor regarding the plane

Just joking but still you can do it

, No problem to add some extra detail to the engine. Next Wed I will bring all the reference I have.
bcauchi

The plane and tent might be a bit too much but i do agree that you should add the mechanic, it would be magnificent and make more sense than just a guy looking at the engine. No story in that.
olivermifsud 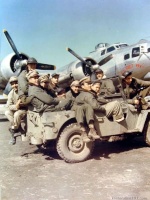 Nice set up RayC, though adding a mechanic would look a cute vignette I think that shall be your nightmare, nothing is available to fit the scene and if you find probably nothing near the awesome sculpting by M.Good.

On the other hand [marco correct me if I am wrong] Mr Voss liked to fiddle with engines himself ... so there you go you might make up the scene, I would maybe enlarge the tripod and add a chair or two, and some dirty cloth, parts of the engine oround and some spanners and tools. There are items in PE, maybe 1/35 but they can fit for 1/48 [the small ones]. As for real chain you have to seek ScaleLink or easier a jeweller [LOL]. I have some PE chain but they look too flat and probably do not take the weight of a resin engine. Tough Mr Voss look relaxed, I still think he shall look pretty good for a solo vignette, looking at the engine probably wondering for some further adjustments ... have a go mate, it shall look pretty sweet!

Thank you all for your input and pledges of help. I never doubted about that!!!:-)
@Ivan I think you're right about Voss's "pastime". In fact the person sitting by the engine is Werner himself. Yes I'm aware that films are not to be taken seriously, but I heared many times that Voss liked to fiddle with engines. At first I was going for your suggestion and put in the Bently and scratchbuilt Fokker Triplane cowling, but couldn't find a decent resin kit of the engine.

@Brian I will think about what you said too. If I stick to the present setting, will make sure that the title be spot on, such as " WERNER VOSS - The pilot and mechanic " or something similar. 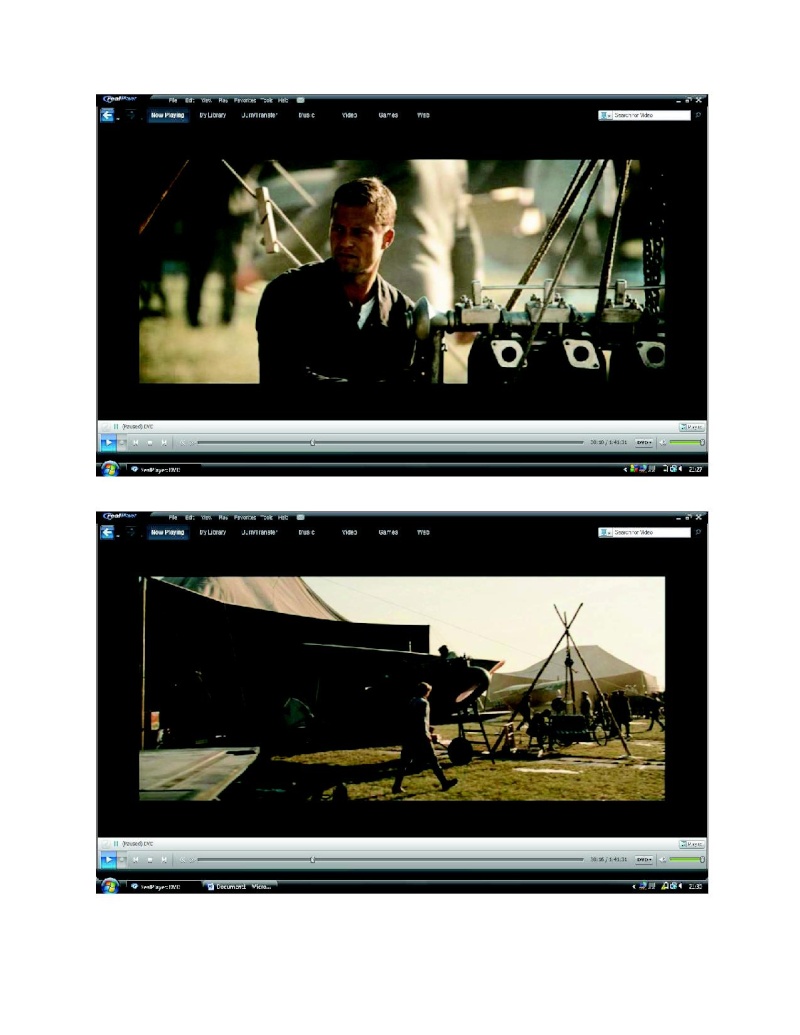 
Just joking but still you can do it

, No problem to add some extra detail to the engine. Next Wed I will bring all the reference I have.

Thanks mate. Will bring the engine kit then.
Luke

Very nice idea on the setup

Ray these are some CMK WWI german fig.. 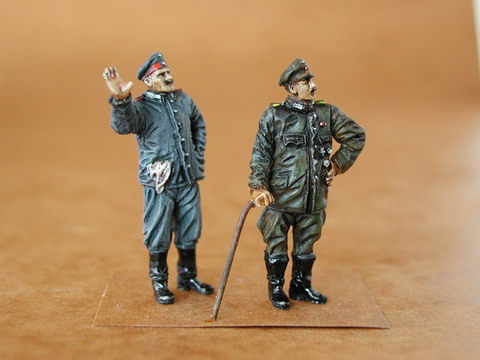 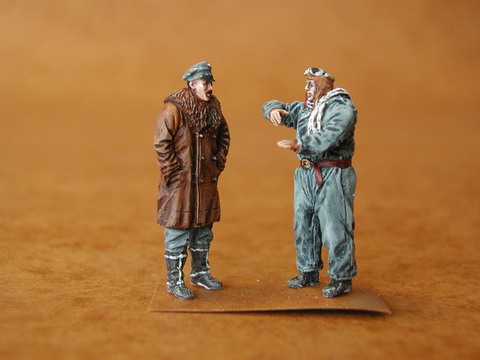 Yes Thanks Marco, but as Ivan rightly pointed, the sculpting is no match to Mike Good's Voss unfortunately

Marco, Ivan, Joseph and whoever can help, I found this para in a review of the movie Red Baron on wings of honor website, which is a bit confusing to me

What are your views?

In one scene Werner Voss is seen with a captured Bentley rotary engine which brings us this conversation:

Manfred: "Where did you get that engine from?"
Werner: "From a british pilot."
Manfred: "He gave it to you?"
Werner: "Not intentionally, I had to persuade him."

In reality Voss equipped his Fokker Dr.I with a captured LeRhone from a Nieuport 17. <Rant On> Personally in the movie I think he has stolen this engine from Josef Jacobs Fokker Dr.I and it was a Clerget and not a Bentley as Jacobs Fokker was the only one I know of sporting a 130 HP Clerget engine during the war. With this engine Voss would have escaped the six S.E.5a that were jumping on him. We never get to see the epic battle between him and McCudden and his boys. Maybe Voss did not possess an English wrench and could not fix the engine accordingly. He then lost it during the dogfight. That's the only explanation I have why it took only six Brits to down one German. But it goes like a red line trough the movie: we never see the important dogfights of W.W.I. Thus we will never know the truth. <Rant Off>
RayCaruana

Le Rhône Rotary Engine (110 HP)
The V4 prototype Fokker Triplane belonging to Voß was equipped with a captured Le Rhône rotary engine. The 110 HP engine was used in many allied aircraft to include the popular Nieuport 17 fighter/scout. By 1917 German manufacturing was having difficulties keeping up with her war needs and it was not uncommon to press servicable captured engines back in to service, especially an engine as reliable as the Le Rhône. 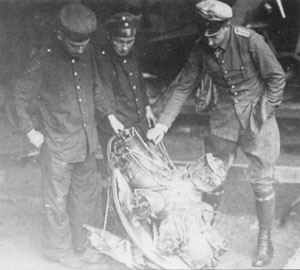 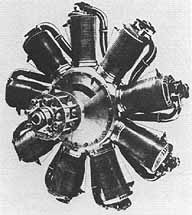 A le Rhone engine in resin from Vector... 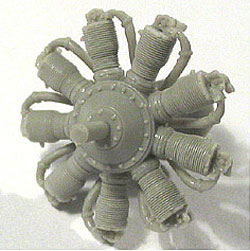 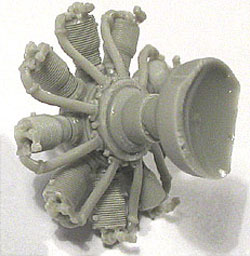 ...Now the title shall be something on the lines of, "I WILL PUT HER ON MY PLANE!" or similar. Any more ideas?
Ray